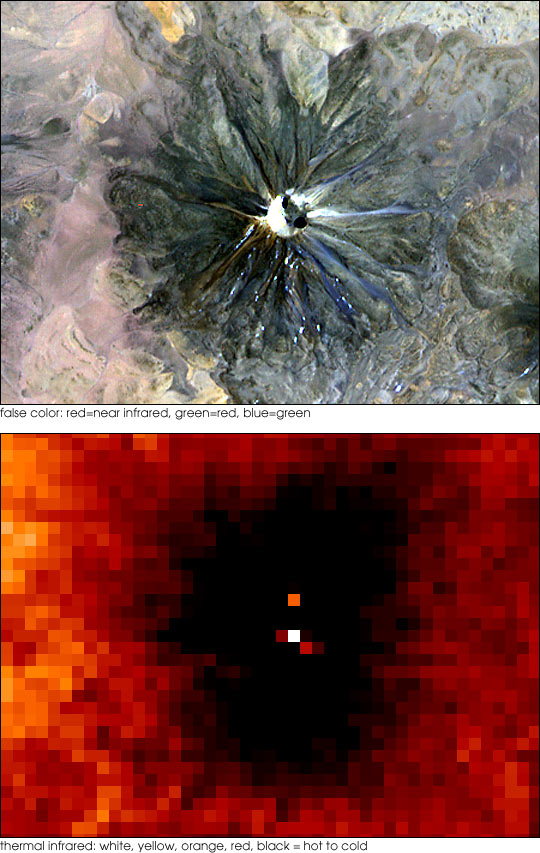 The Chiliques volcano, which sits in northern Chile and hasn’t erupted in at least 10,000 years, is now showing signs of life. This pair of images from the Advanced Spaceborne Thermal Emission and Reflection Radiometer (ASTER) shows the volcano in visible and near-infrared light (top) and thermal infrared (lower). Hot spots can be seen in the thermal infrared image. They are caused by magma just under the surface of the volcano.

Geologists had previously considered Chiliques, a simple 5,778-meter (18,957-foot) stratovolcano with a 500-meter (1,640-foot) diameter circular summit crater, to be dormant. However, a January 6, 2002, nighttime thermal infrared image from ASTER revealed a hot spot in the summit crater as well as several others along the upper flanks of the volcano’s edifice, indicating new volcanic activity. Examination of an earlier nighttime thermal infrared image from May 24, 2000, showed no such hot spots.

Stratovolcanoes such as Chiliques account for approximately 60 percent of Earth’s volcanoes. They are marked by eruptions with cooler, stickier types of lava such as andesite, dacite, and rhyolite. Because these types of lava tend to plug up volcanic plumbing, gas pressures can more easily build up to high levels, often resulting in explosive eruptions. The material spewed forth during the eruptions consists roughly of an equal mixture of lava and fragmented rock, so these volcanoes are also commonly known as composite volcanoes. Mount Saint Helens in Washington and Mount Pinatubo in the Philippines are examples of stratovolcanoes.

The daytime image of Chiliques was acquired on November 19, 2000, and was created by displaying ASTER bands 1, 2, and 3 in blue, green, and red. The nighttime image is a color-coded display of a single thermal infrared band. The hottest areas are white and colder areas are darker shades of red. Both images cover an area of 6.75 by 5 kilometers (4.2 by 3.1 miles), and are centered at 23.6 degrees south latitude, 67.6 degrees west longitude.