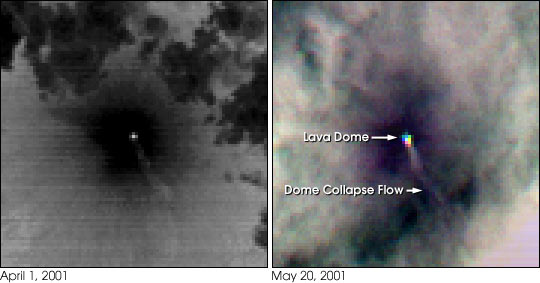 The 2,462-meter Mayon volcano, located about 340 km southeast of Manila in Albay province, Philippines, is famous for its near-perfect conical shape despite dozens of eruptions in the past 300 years. Mayon’s last major eruption was in 1993, when 70 people died and more than 50,000 people were evacuated. These two nighttime thermal infrared images were captured by the Advanced Spaceborne Thermal Emission and Reflection Radiometer (ASTER), flying aboard NASA's Terra spacecraft, on April 1 and May 20, 2001. Each image has a spatial resolution of 90 meters per pixel.

The April image shows the cone with a small hot spot (white) on the summit. The May image was taken during a period of more intense activity, and shows a large hot spot where a lava dome has formed, and a possible lava flow on the southeast side.