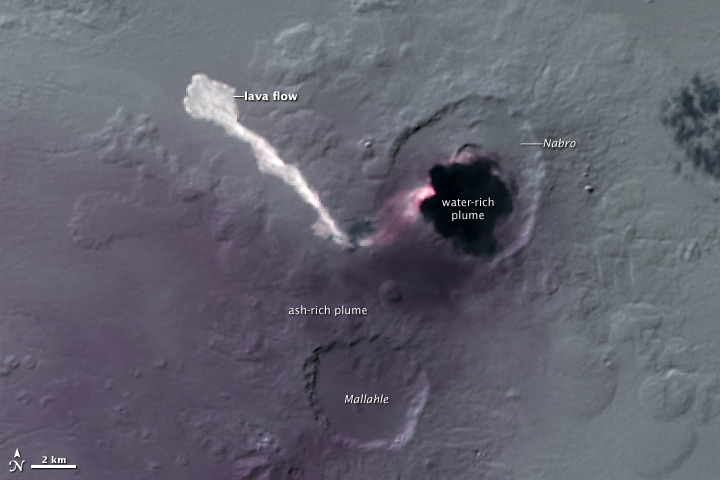 After nearly a week of explosive activity, Eritrea’s Nabro Volcano seems to be evolving toward a milder, more effusive eruption. By June 19, 2011, the altitude of Nabro’s ash plume dropped from a maximum of 45,000 feet (14,000 meters) to 25,000 feet (7,600 meters), according to the Joint Air Force & Army Weather Information Network. The shrinking plume revealed a 15-kilometer (9.3-mile) lava flow, visible in this thermal infrared, false-color image.

The Advanced Spaceborne Thermal Emission and Reflection Radiometer (ASTER) aboard the Terra satellite observed Nabro on the evening of June 19. Hot areas are bright, and cold areas are dark. Thermal infrared data were combined with a shaded relief image to show the terrain. The white feature exending to the northwest is an active lava flow. A high-altitude plume, likely rich in water vapor, is nearly black, and obscures the erupting vents. A diffuse, ash-rich plume to the southwest of Nabro appears purple.

Because the volcano is located in a remote, hard-to-access region, satellite images provide valuable insight into the nature of the eruption. The lava flow fans out in the flat plain, providing a clue that it is probably basalt lava, which is thinner (less viscous) than other types, says volcanologist Eric Klemetti in his analysis of the image. Basalt lava can travel long distances before cooling, thus covering a wide area.

Prior to June 12, 2011, Nabro had not erupted in recorded history. It is unknown when the volcano last erupted. The volcano is one of many along Africa’s Great Rift Valley, which is slowly spreading apart. 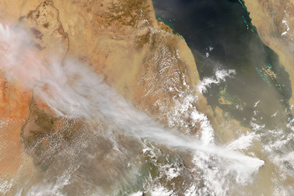 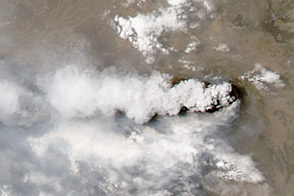 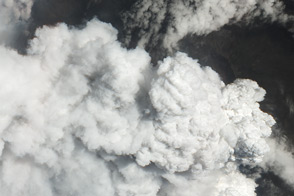