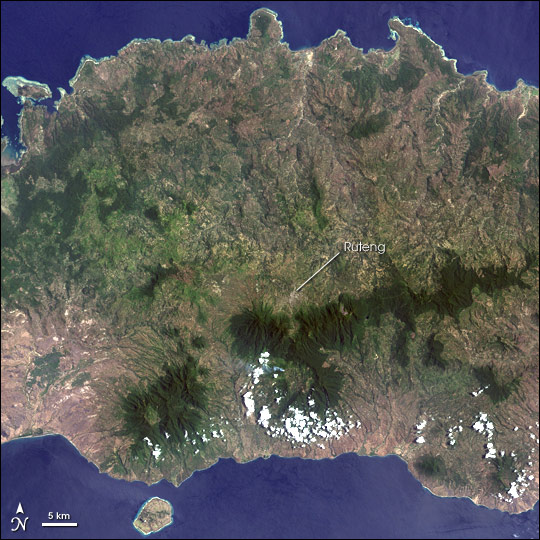 The Indonesian islands are scattered across the ocean like a series of mountainous stepping stones between the tip of Southeast Asia and the island of New Guinea. Many of the islands are on the boundary of the Pacific, Eurasian, and Indian tectonic plates, and are volcanic in origin. This Landsat image shows the forested volcanic hills in western Flores, one of the most volcanically active of all the islands.

Recently archeologists working on the island made an explosive discovery of a non-volcanic kind: a new human species. In a rock shelter named Liang Bua, near the city of Ruteng, researchers unearthed the nearly complete adult skeleton, probably female, of an individual who stood only one meter high and had a skull the size of a grapefruit. Researchers also found teeth from seven other individuals of similar stature.

Formally named Homo floresiensis and affectionately nicknamed “hobbits,” these diminutive hominins (a term that includes all human species and our immediate ancestors) lived on Flores between 38,000 and 18,000 years ago, and probably lived there for a longer time span. In other words, Homo floresiensis coexisted with Homo sapiens.

Archeologists and biologists have been interested in Flores for some time because of its physical and ecological isolation during the last 2.6 million years. Unlike the islands of Sumatra and Java to the west, Flores was not connected by land bridges to Asia or Australia at times of low sea level, and therefore were not colonized by Asian land animals, in particular the so-called “megafauna” such as the Sumatran tiger.

Like other animals that become isolated in extreme environments with limited resources, the newly discovered human species probably shrank to dwarf size under evolutionary pressure. The same pressures probably produced the now-extinct pygmy elephant Stegodon, remains of which were found with H. floresiensis, suggesting that the small elephant was a food source.

Locating fossil remains and artifacts in the tropics isn’t easy. In the hot, moist climate, remains tend to decay and wash away rapidly. However, throughout history, humans have lived in caves and rock shelters, and in those locations, their remains are much more likely to be preserved. International and local archeologists and biologists have been working at the Liang Bua cave site on western Flores for many years to understand human history in Indonesia.

This image of Flores was acquired by the Landsat 7 satellite’s Enhanced Thematic Mapper Plus (ETM+) instrument on September 29, 1999. This true color image was created by combining the red, green, and blue wavelengths (ETM+ bands 3, 2, and 1).