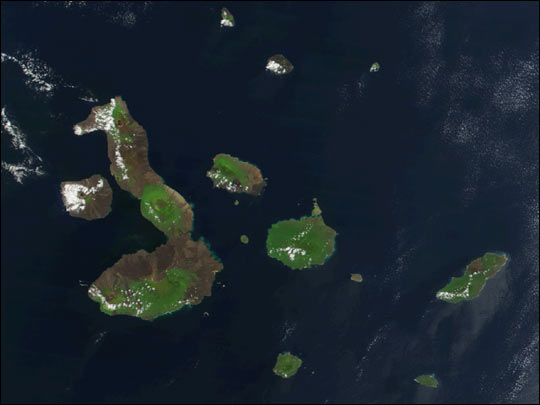 This true-color image of the Galapagos Islands was acquired on March 12, 2002, by the Moderate-resolution Imaging Spectroradiometer (MODIS), flying aboard NASA's Terra satellite. The Galapagos Islands, which are part of Ecuador, sit in the Pacific Ocean about 1000 km (620 miles) west of South America. As the three craters on the largest island (Isabela Island) suggest, the archipelago was created by volcanic eruptions, which took place millions of years ago.

Unlike most remote islands in the Pacific, the Galapagos have gone relatively untouched by humans over the past few millennia. As a result, many unique species have continued to thrive on the islands. Over 95 percent of the islands’ reptile species and nearly three quarters of its land bird species cannot be found anywhere else in the world. Two of the more well known are the Galapagos giant tortoise and marine iguanas. The unhindered evolutionary development of the islands’ species inspired Charles Darwin to begin The Origin of Species eight years after his visit there. To preserve the unique wildlife on the islands, the Ecuadorian government made the entire archipelago a national park in 1959. Each year roughly 60,000 tourists visit these islands to experience what Darwin did over a century and a half ago.