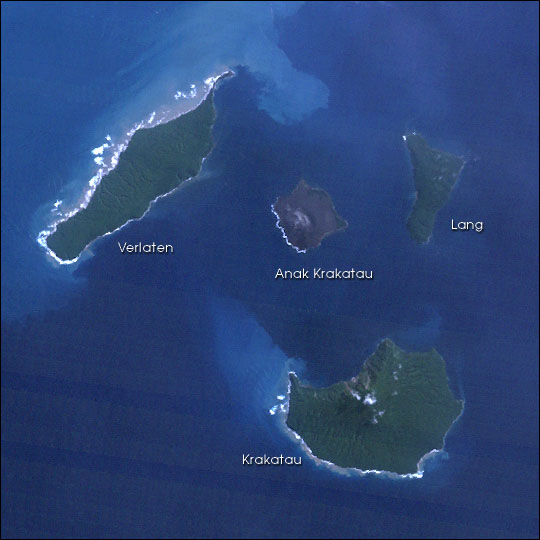 Nestled between the large Indonesian islands of Java and Sumatra is the Krakatau Volcano National Park. In the fourth century, a single marine volcano stood at this site, but in 416 A.D., the caldera of the volcano collapsed. The remnants formed a new caldera around 7 km (4 miles) in diameter, with the peak’s remnants becoming the three islands of Verlaten, Lang, and Krakatau (formerly known as Krakatoa). This volcano remnant was not dormant, however, and in August 1883 the volcano on Krakatau erupted with such violence that the sound was heard as far away as Madagscar and Alice Springs, thousands of kilometers away. Two-thirds of the island was destroyed and roughly 20 cubic kilometers of rock was lofted into the atmosphere. It was one of the largest explosions on Earth in recorded history. The eruption also raised a tsunami 40 meters (130 feet) high which resulted in an estimated 36,000 deaths when it washed ashore as much as 10 kilometers inland from the coast of nearby islands. Since 1927, continued eruptions and outflow material has formed the fourth island in the park, Anak Krakatau—“Child of Krakatau.”

An interesting side effect of the 1883 explosion was the total sterilization of the islands. This allows scientists to study in detail the process by which isolated ecosystems acquire new species and how they become established. Sitting in the Sundra Straits, material from the Pacific and Indian Oceans are funneled past the islands, providing a great deal of potential starting points for new species on the islands. One lesson has been that, given time and space to do so, tropical forests can recover from traumatic disruptions. For example, on the slopes of Rakata, the remnant peak of the 1883 explosion on the island of Krakatau, the land has been covered in forest. Though nowhere near as ecologically rich as pristine forests elsewhere in the Indonesian archipelago, the islands are home to a wide variety of plants and animals. Anak Krakatau’s eruptions completely sterilized that island in 1953 and the progression of new species after the disturbance showed the same cycle of species re-establishing themselves. A set of core species move in at first, most of them dispersed to the islands by the sea (though some arrive as spores carried by wind). After these species are established, animals may begin to play a role in new species development, at which point chance variation begins to dominate. For example, on the three main islands, there are differences in dominant tree species even though the islands are only a few kilometers from each other.

This scene was acquired by the Landsat 5 Thematic Mapper instrument on May 18, 1992. This natural-color composite uses red, green, and blue wavelengths (TM bands 3, 2, and 1).