Pollution over China Blows out to Sea 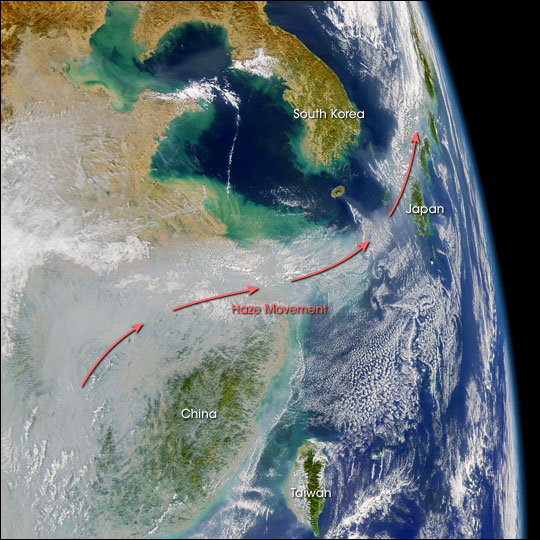 The atmosphere is a globally shared natural resource, and this image from the Sea-viewing Wide Field-of-view Sensor (SeaWiFS) illustrates the point. A pool of air pollution has spread out over eastern China and then slipped over the coast like water over a dam. A river of haze flows across the East China Sea past the Korean Peninsula and northeastward toward Japan, where it arcs along the western coastline of the island chain before disappearing out of the scene at upper right.

Rapidly developing China is the world's second largest consumer of energy (the United States is first), and its primary fuel is coal, most of it burned in inefficient power plants that emit large amounts of carbon emissions and sulfur dioxide, which is the precursor to acid rain. Increasing affluence in the country is also giving rise to a vehicle boom. As cities become more and more clogged with cars, skies become more and more clogged with automobile emissions. Scenes such as this one from October 22, 2004, are not uncommon for this region.

With the typical Northern Hemisphere "Westerlies" flowing from west to east across the mid-latitudes of the Northern Hemisphere, the air pollution from eastern China regularly spreads to South Korea and Japan and out over the Pacific Ocean. Trans-boundary pollution occurs in many places across the globe, and most nations are simultaneously sources of pollution for countries "downwind," and recipients of another country's pollution.

Incomplete burning of carbon-based fuels like coal and wood leads to a build-up of haze in eastern China, where mountains and weather patterns can trap it for days at a time. This Terra MODIS image is a comparison of a hazy day and a relatively clear day in February 2005.