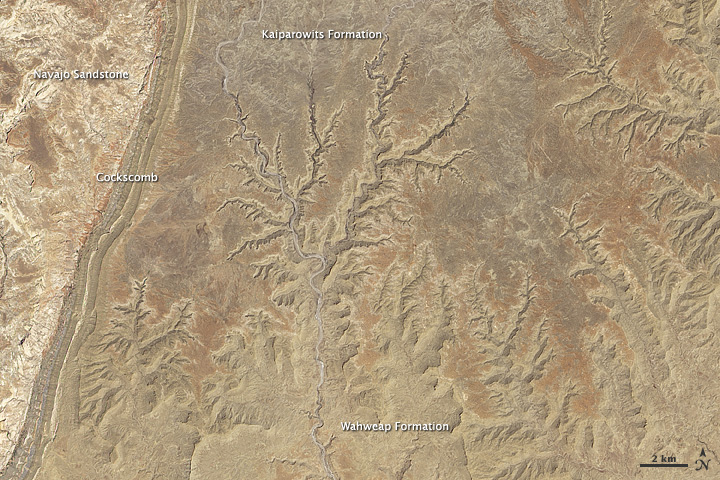 In south-central Utah, the Grand Staircase-Escalante National Monument preserves a geologic history spanning almost 275 million years. The oldest rocks date from the Permian Period, when the land that is now Utah straddled the Equator. Some of the youngest rocks date from the Eocene Epoch, when crocodiles and palm trees lived above the Arctic Circle. Many of the rock layers in the national monument date to the time of the dinosaurs. In September 2010, Scott Sampson of the Utah Museum of Natural History and his colleagues described two new dinosaur species found in this national monument.

On May 15, 2005, the Advanced Land Imager (ALI) on NASA’s Earth Observing-1 (EO-1) satellite captured this natural-color image of part of the Kaiparowits Basin. This central portion of Grand Staircase-Escalante preserves rock layers primarily from the Mesozoic Era. The branch-like shapes are networks of canyons carved by rivers that dried up millions of years ago. The area receives far less precipitation than it did in ages past.

In the late Cretaceous, when ceratopsian dinosaurs lived, a shallow sea divided North America in two. Geologists call the western mini-continent Laramidia and the eastern mini-continent Appalachia. The shallow sea advanced and retreated multiple times, and an asteroid strike and other calamities about 65 million years ago brought the Age of Reptiles to an end. Since that time, tectonic forces have uplifted the area, leaving it largely high and dry as it remains today.

Fossils such as Utahceratops gettyi and Kosmoceratops richardsoni reveal a fascinating history of life on Earth. October 13, 2010, marks the first annual National Fossil Day, a good time to dig into the planet's history for Earth Science Week.

Acquired May 15, 2005, this natural-color image shows part of the Grand Staircase-Escalante National Monument in south-central Utah.