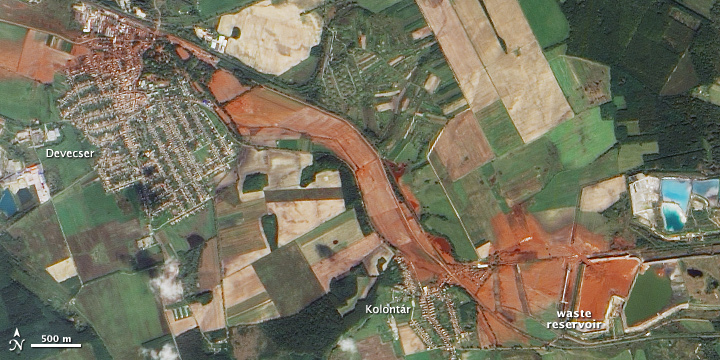 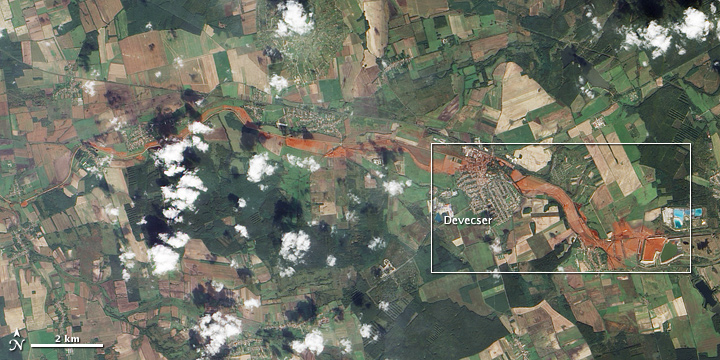 On October 4, 2010, an accident occurred at the Ajkai Timföldgyár alumina (aluminum oxide) plant in western Hungary. A corner wall of a waste-retaining pond broke, releasing a torrent of toxic red sludge down a local stream. Several nearby towns were inundated, including Kolontar and Devecser, where the sludge was 2 meters (6.5 feet) deep in places. Four people were killed immediately, likely from drowning, and several more were missing. Dozens of residents were hospitalized for chemical burns.

On October 9, 2010, the Advanced Land Imager (ALI) on NASA’s Earth Observing-1 (EO-1) satellite captured this natural-color image of the area. The top image shows a close-up of the alumina plant and closest villages. The bottom image shows the wider region.

The alumina plant appears along the right edge of both images, and incorporates both bright blue and brick red reservoirs. The breach of the retaining wall is apparent in the close-up view. Sludge cut a channel through the northwest corner of the waste reservoir and spread onto nearby fields.

The sludge forms a red-orange streak running west from the plant. The wide-area view shows the spill thinning but remaining discernible for several kilometers to the west. The New York Times reported that the stream nearest the plant empties into larger rivers. The BBC reported that authorities were pouring plaster into the Marcal River in hopes of preventing the sludge from reaching the Danube River.

The red sludge is a byproduct of refining bauxite into alumina, which is used in the manufacture of aluminum and other products. The World Wide Fund for Nature (WWF) suggested that heavy metals in the sludge could soak into the ground and be absorbed by vegetation, potentially causing environmental effects for decades.

In the early morning hours of December 22, 2008, the earthen wall of a containment pond at Tennessee’s Kingston Fossil Plant gave way. The breach released 1.3 million cubic meters (1.7 cubic yards) of sludge, infiltrating a nearby river and damaging dozens of homes. 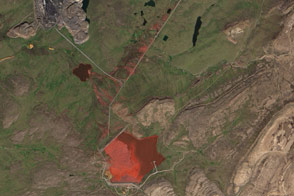