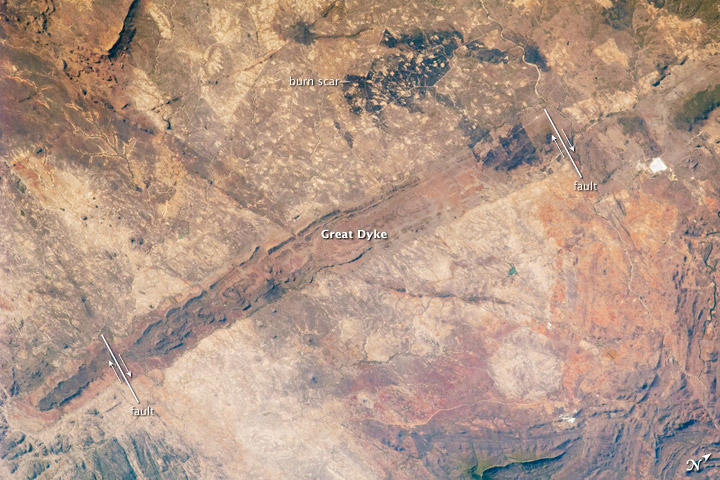 The Great Dyke of Zimbabwe is a layered mafic intrusion of igneous, metal-bearing rock that has been dated to approximately 2.5 billion years old. The dyke (or dike in American English) intrudes through the even older rocks of African craton, the core of oldest rocks forming the continent of Africa. In cross section, the Great Dyke looks somewhat triangular or keel-shaped, suggesting to geologists that it rose along deep faults associated with extension of the African crust.

This geological feature extends more than 550 kilometers (342 miles) northeast to southwest across the center of Zimbabwe, varying from 3 to 12 kilometers (2-8 miles) in width. The southern end of the dyke is captured in this astronaut photograph.

Layered mafic intrusions are usually associated with economically important metals such as chromium, nickel, copper, platinum, titanium, iron, vanadium, and tin. Chromium, in the form of the mineral chromite, and platinum are particularly abundant in the Great Dyke and actively mined. Younger faults have offset sections of the Dyke along its length; two of the most obvious faults in the image are indicated, with arrows showing the relative directions of offset.

While the Great Dyke and its metal ores are products of geologic processes from the deep past, more recent events have also left their mark on the landscape. Two large burn scars from fires are visible at image top center.

An older, more detailed view of the Great Dyke can be found in an astronaut photograph available here.

Astronaut photograph ISS025-E-5538 was acquired on September 30, 2010, with a Nikon D2Xs digital camera using a 180 mm lens, and is provided by the ISS Crew Earth Observations experiment and Image Science & Analysis Laboratory, Johnson Space Center. The image was taken by the Expedition 25 crew. The image in this article has been cropped and enhanced to improve contrast. Lens artifacts have been removed. The International Space Station Program supports the laboratory as part of the ISS National Lab to help astronauts take pictures of Earth that will be of the greatest value to scientists and the public, and to make those images freely available on the Internet. Additional images taken by astronauts and cosmonauts can be viewed at the NASA/JSC Gateway to Astronaut Photography of Earth. Caption by William L. Stefanov, NASA-JSC.

The Great Dyke of Zimbabwe is a layered intrusion of igneous, metal-bearing rock that has been dated to approximately 2.5 billion years in age. 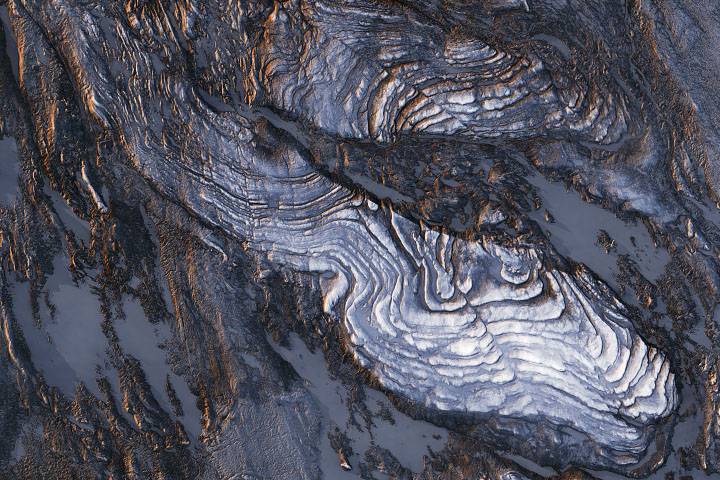