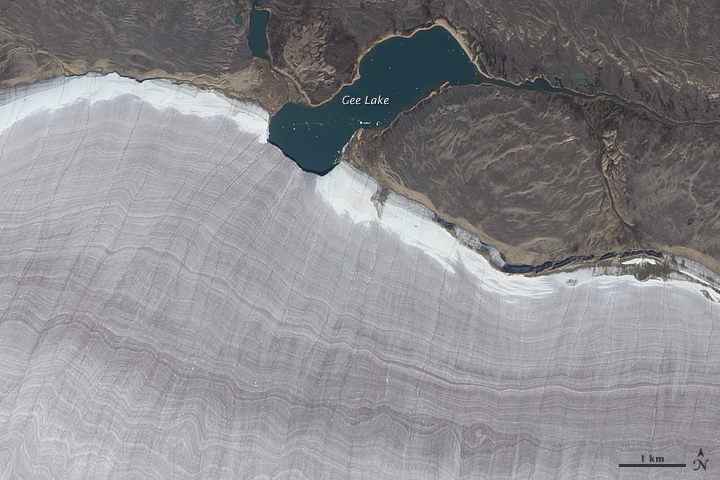 A remnant of the Laurentide Ice Sheet that sprawled over North America during the Pleistocene Age, the Barnes Ice Cap is a bowling-pin-shaped glacier on Canada’s Baffin Island.

The Advanced Land Imager (ALI) on NASA’s Earth Observing-1 (EO-1) satellite captured this natural-color image on September 4, 2010. It shows a portion of the Barnes Ice Cap near its southeastern end. Gee Lake sits immediately off the glacier.

Resembling growth lines on a clamshell, striations run roughly east-west on the glacier surface. Rather than appearing pristine white, the ice and snow is banded with dust layers spanning time periods that dwarf a human life. By studying ice cores containing such dust layers, climatologists can find clues to ancient climates.

Ted Scambos of the National Snow and Ice Data Center observes that although the ice cap is essentially flat, it appears to undulate, thanks to ridges cut by melt streams running off the glacier. In this summertime shot, the glacier is mostly snow-free except for a band of snow along the edge near Gee Lake. As winter returns, snow will once again cover the glacier, the surrounding land, and the lake.