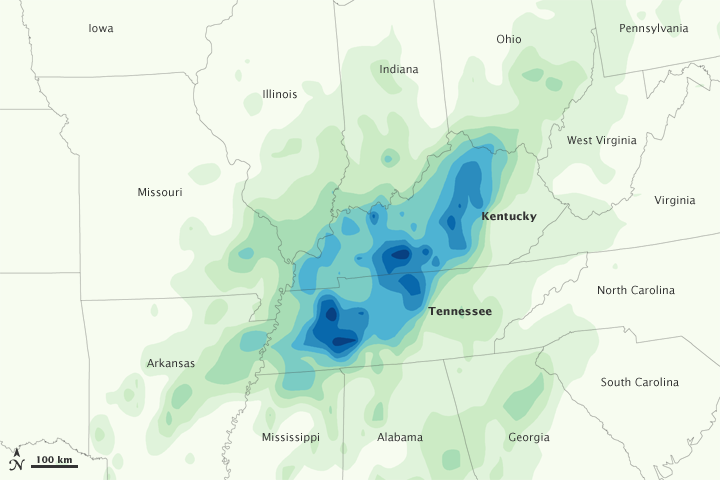 Extreme rain inundated Tennessee and Kentucky on May 1-2, 2010. A line of severe thunderstorms moved over the states on Saturday, May 1, and a high-pressure system blocked the storms from moving east. Trapped in place and fed by humid air from the Gulf of Mexico, the storms unleashed heavy rain on Tennessee and Kentucky. By 7:00 p.m. on May 2, rain gauges on the ground recorded between 10 and 19 inches (250-480 millimeters) of rain in the hardest hit regions.

This image shows rainfall totals between May 1 and May 3, 2010, as recorded by the Multi-satellite Precipitation Analysis, a near-real-time rainfall analysis based on rainfall measurements collected by the Tropical Rainfall Measuring Mission (TRMM) satellite. Pockets of dark blue indicate heavy rain with totals greater than 200 millimeters (8 inches). Lighter shades of blue indicate less rain. The most intense rain stretches in a line across Tennessee and Kentucky, corresponding to the area affected by the thunderstorms.

The rainfall totals in this image don’t perfectly match totals recorded on the ground. Rainfall gauges measure rain at a single location on the ground, while satellites record rainfall totals across a broader region. This means that in the satellite data, extremely heavy rain is averaged out by lighter rain nearby. Satellites provide a consistent view of the distribution of rain, while rain gauges record local rainfall totals.