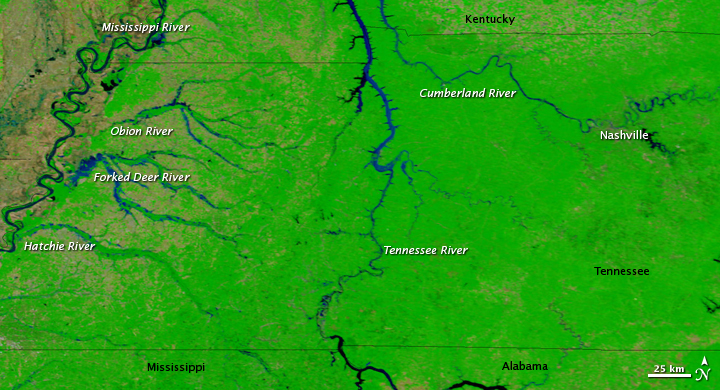 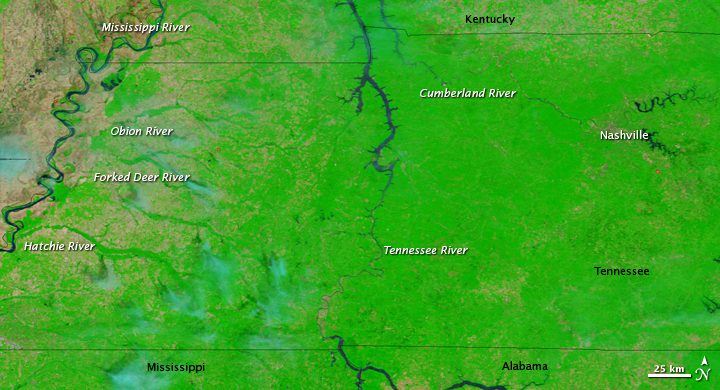 Record-breaking rain triggered severe and widespread flooding across Tennessee starting on May 1, 2010. This false-color image provides a cloud-free view of the region’s swollen rivers as seen by the Moderate Resolution Imaging Spectroradiometer (MODIS) on NASA’s Terra satellite on May 4, 2010. Terra MODIS acquired the lower image on April 29, 2010, just two days before the storm.

The images combine infrared and visible light to increase the contrast between water and land. Water is black or blue, while plant-covered ground is bright green. Bare earth around the Mississippi River is tan, and clouds are pale blue.

A comparison between the two images reveals flooding on nearly every river system. The landscape is marbled blue from countless swollen streams that aren’t even visible in the pre-flood image. The Tennessee and Cumberland Rivers and their tributaries are wider on May 4 than they were on April 29. In the west, the Obion, Forked Deer, and Hatchie Rivers are also notably swollen.

Flooding across middle Tennessee was at record or near-record levels, said the National Weather Service. The Cumberland River crested at 51.86 feet in Nashville on May 3, the river’s highest level since the Cumberland River dam system was built in the early 1960s. Four other Tennessee Rivers also reached record highs, said the National Weather Service. By May 4, when this image was taken, the rivers had started to slowly recede.

Floods across Tennessee, Mississippi, and Kentucky caused at least 27 deaths and damaged parts of historic Nashville, reported CNN on May 4.

The landscape of Tennessee is marbled blue in this false-color satellite image from May 4, 2010, revealing extensive flooding.