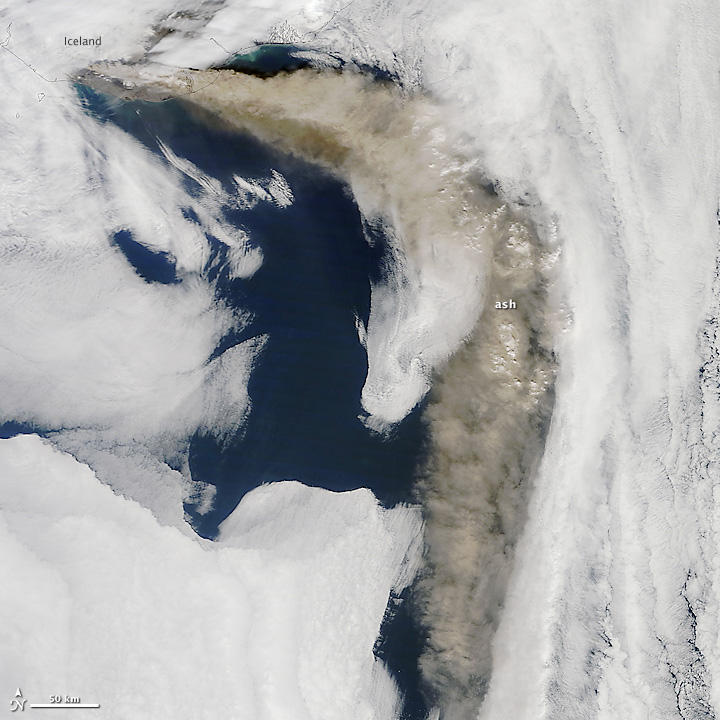 After more than a week of relatively subdued activity in late April, Iceland’s Eyjafjallajokull Volcano began a fresh round of explosive ash eruptions in the first week of May. On the morning of May 6, 2010, the Moderate Resolution Imaging Spectroradiometer (MODIS) on NASA’s Terra satellite captured this view of a thick plume of ash blowing east and then south from the volcano. Clouds bracket the edges of the scene, but the dark blue waters of the Atlantic Ocean show in the middle, and above them, a rippling, brownish-yellow river of ash.

Ash clouds like this are impressive to see, and they can have a dramatic influence on air quality and vegetation, including crops. In Iceland, the ash from Eyjafjallajokull has settled thickly on the ground, posing a threat to livestock and wildlife. The risk of engine damage due to ash has grounded European air traffic repeatedly.

Despite their dramatic appearance, however, these ash plumes are insignificant when it comes to long-term affects on global climate. What matters most to the climate isn’t even visible in images like this. For an eruption to have an influence on global climate, the event must be explosive enough to push sulfur dioxide into the stratosphere, which is above the altitude where rain and snow occur.

Sulfur dioxide turns into tiny droplets of sulfuric acid. These light-colored droplets cool the Earth by reflecting sunlight back to space. Because it doesn’t rain in the stratosphere, the droplets can linger for months or years. Massive eruptions can cool the global average surface temperature by several degrees for several years.

In most cases, though, high-latitude eruptions have little influence on global climate even when they are explosive enough to inject sulfur dioxide into the stratosphere; the reflective particles rarely have a chance to spread around the globe. Stratospheric air generally rises above tropical latitudes, spreads toward the poles, and then sinks back toward the lower atmosphere at high latitudes.

This circulation pattern means that stratospheric particles from eruptions in the tropics have a better chance of spreading all around the world, while particles from high-latitude eruptions are more likely to quickly sink back to lower altitudes. When they re-enter the troposphere, they are rapidly washed out of the atmosphere by rain and snow. Eyjafjallajokull’s high-latitude location means that its eruption probably won’t influence the global climate significantly.

A broad plume of brown ash spreads east and south from Eyjafjallajokull Volcano in this image from May 6, 2010.