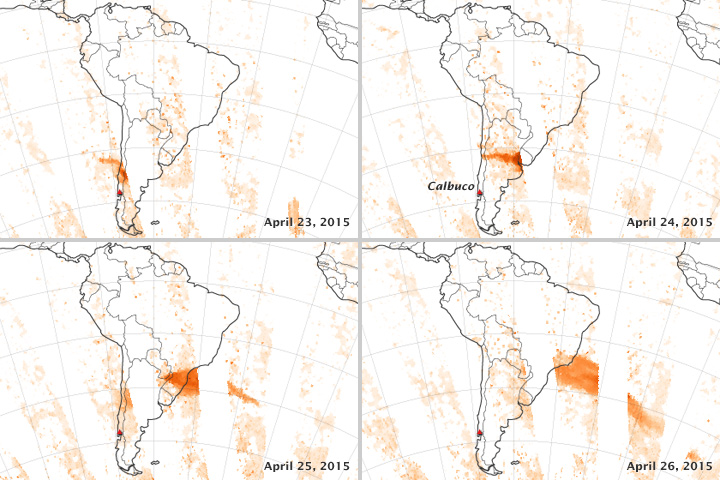 Late on April 22, 2015, Calbuco volcano in southern Chile awoke from four decades of slumber with an explosive eruption. Ash and pumice particles were lofted high into the atmosphere, and the debris has been darkening skies and burying parts of Chile, Argentina, and South America for nearly a week. Along with 210 million cubic meters of ash and rock, the volcano has been spewing sulfur dioxide (SO2) and other gases.

Near the land surface, sulfur dioxide is a acrid-smelling gas that can cause respiratory problems in humans and animals. Higher in the atmosphere, it can have an effect on climate. When SO2 reacts with water vapor, it creates sulfate aerosols that can linger for months or years. Those small particles can have a cooling effect by reflecting incoming sunlight.

The images above show the average concentration of sulfur dioxide over South America and surrounding waters between from April 23–26, 2015. The maps were made with data from the Ozone Monitoring Instrument (OMI) on NASA’s Aura satellite. Like ozone, atmospheric sulfur dioxide is sometimes measured in Dobson Units. If you could compress all the sulfur dioxide in a column of atmosphere into a single layer at the Earth’s surface at 0 degrees Celsius, one Dobson Unit would be 0.01 millimeters thick and would contain 0.0285 grams of sulfur dioxide per square meter.

On the maps above, data appear in stripes or swaths, revealing the areas observed (colored) or not observed (clear) by Aura on a given day. Note how the plume moves north and east with the winds. By April 28, the plume of SO2 had reached the Indian Ocean.

“Satellite sulfur dioxide data are critical for understanding the impacts of volcanic eruptions on climate,” said Simon Carn, a part of the OMI team and professor at the Michigan Technological University. “Climate modelers need estimates of SO2 mass and altitude to run their models and accurately predict the atmospheric and climate impacts of volcanic eruptions. SO2 plume images also provide unique insights into the atmospheric transport and dispersion of trace gases in the atmosphere, and on upper atmospheric winds.”

So far, Calbuco has released an estimated 0.3 to 0.4 teragrams (0.3 to 0.4 million tons) of SO2 into the atmosphere. The gas was injected into the stratosphere (as high as 21 kilometers), where it will last much longer and travel much farther than if released closer to the surface. The SO2 will gradually convert to sulfate aerosol particles. However, it is not clear yet if there will be a cooling effect from this event.

The SO2 total is much lower than the recent Holuhraun eruption, which released about 11–12 teragrams, or 30 to 40 times more than Calbuco. “But the SO2 from Holuhraun was emitted over several months and was mostly confined to the lower troposphere, limiting its climate impacts,” Carn noted. “In terms of climate impacts, Calbuco is probably more significant due to the stratospheric SO2 injection.”

The natural color image below, acquired on April 25 by the Advanced Land Imager on NASA’s Earth Observing-1 satellite, shows Calbuco’s plume rising above the cloud deck over Chile. 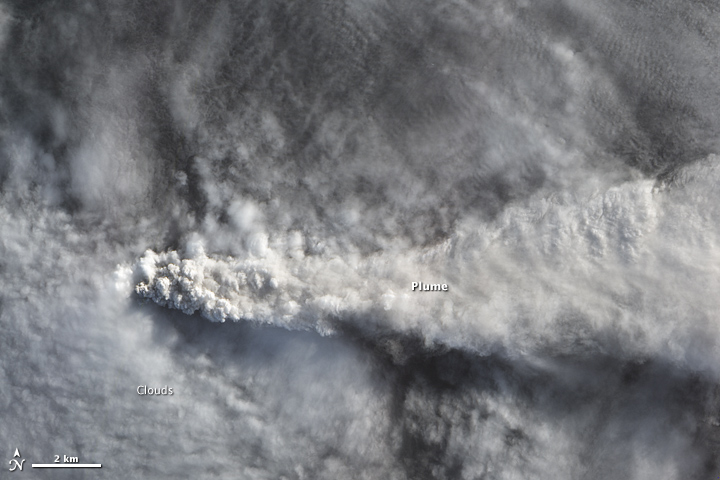 “Although a single eruption of this size is unlikely to have a measurable effect on climate,” Carn added, “recent work suggests that the cumulative effects of multiple volcanic eruptions of this size in the past decade may have slowed the rate of global warming due to the stratospheric sulfate aerosols produced.” 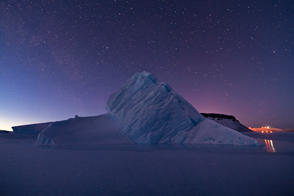 On May 2, 2008, the Chaiten Volcano of southern Chile rumbled to life, also sending a cloud of ash high into the atmosphere.