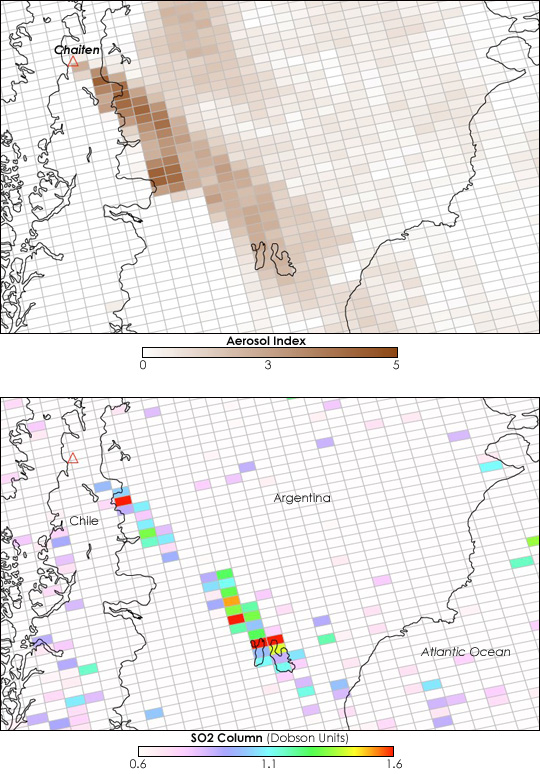 When the Philippine’s Mount Pinatubo erupted in June 1991, it was a tremendous, explosive eruption that buried the surrounding countryside in a thick layer of ash and mud and pumped a cloud of ash and gas high into the atmosphere. Sulfur dioxide rose high into the stratosphere 34 kilometers above Earth’s surface and circled the globe. The gas combined with water to form a fog-like screen of sulfate aerosols that shielded Earth’s surface like a giant shade, and for more than a year the global average temperature dropped by 0.5 degrees Celsius. On May 2, 2008, the Chaiten Volcano of southern Chile rumbled to life, also sending a cloud of ash high into the atmosphere. Are we in for a cool summer in the wake of the eruption? Most likely not, and the reason is illustrated in this pair of images.

The images compare total aerosols, tiny particles of both ash and sulfates, top, to the part of the plume made up of sulfur dioxide alone, below. These observations were made by the Ozone Monitoring Instrument (OMI) on NASA’s Aura satellite on May 3, 2008. (For a photo-like image from May 3, see Chaiten Volcano Erupts.) The top image illustrates that the volcanic plume was thickest near the volcano and thinned as it blew southeast over the Atlantic Ocean. The lower image shows the sulfur dioxide component of the plume in Dobson Units. If you flattened a five-kilometer-tall column of the atmosphere and measured the amount of sulfur dioxide in the column, one Dobson Unit of the gas would be 0.01 millimeters thick and would contain 0.0285 grams of sulfur dioxide per square meter. This image shows that Chaiten pumped out relatively little sulfur dioxide in its eruption. Most of the aerosols in the plume were ash.

Because Chaiten did not put a high concentration of sulfate aerosols into the atmosphere, it is unlikely to have an effect on global temperatures. But its impact is also limited by its location. Most of the volcanoes that have influenced global temperatures are located in the center of the globe near the equator. Winds in the stratosphere in the tropics quickly circulate sulfate aerosols around the globe. By contrast, stratospheric winds near the poles tend to push sulfate aerosols towards the poles and towards the surface, limiting the area influenced by the aerosols. Located in southern Chile far from the equator, Chaiten would be unlikely to influence global temperatures even if the amount of sulfur dioxide coming from the volcano were higher (unless the eruption were sustained for many months).

On May 2, 2008, the Chaiten Volcano of southern Chile rumbled to life, also sending a cloud of ash high into the atmosphere.