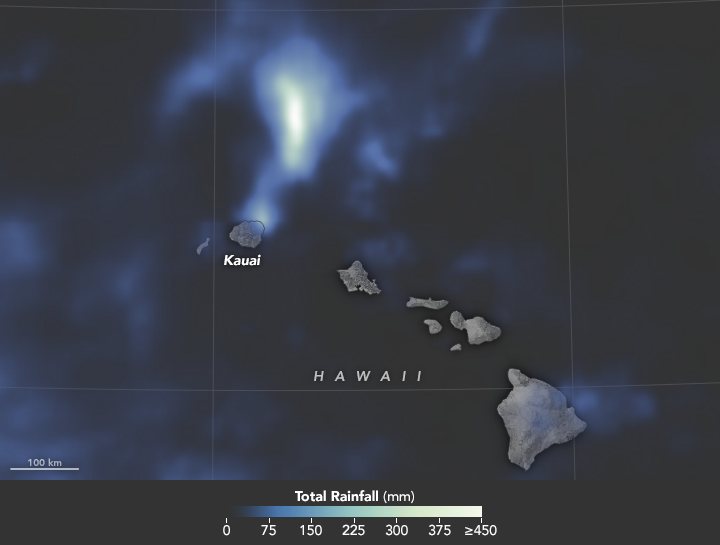 The north shore of the Hawaiian island Kauai may have set a national record for the most rainfall ever in a 24-hour period, according to preliminary data. Rain gauges in Waipa, about a mile west of Hanalei, recorded 49 inches (124 cm) on April 14 and 15 — more precipitation than gauges measured during Hurricane Harvey over Texas in September 2017.

Intense rainfall cut a path through Hanalei, which received 28 inches (713 mm) of rainfall. The U.S. Army and National Guard airlifted more than 220 people from the Haena and Wainiha areas after Kuhio Highway, the only road that leads to them, was blocked by landslides. Floodwaters carried off bison, some of which were rescued from the ocean. Ocean water around Kauai was an unusual shade of orange for a week after the storm because red–orange clay from the mountaintops was swept into the water by the rain.

The torrential rain began on April 12, when an elongated area of low pressure disrupted the normal flow of the northeast trade winds above Oahu. This caused heavy rainfall as the system strengthened and moved slowly over Kauai. The rain event lasted through April 19.

This map shows rainfall accumulation over the Kauai area from April 12 to April 19. These rainfall data are remotely–sensed estimates that come from the Integrated Multi-Satellite Retrievals for GPM (IMERG), a product of the Global Precipitation Measurement mission. The GPM satellite is the core of a rainfall observatory that includes measurements from NASA, the Japan Aerospace Exploration Agency, and five other national and international partners. Local amounts can be significantly higher when measured from the ground.