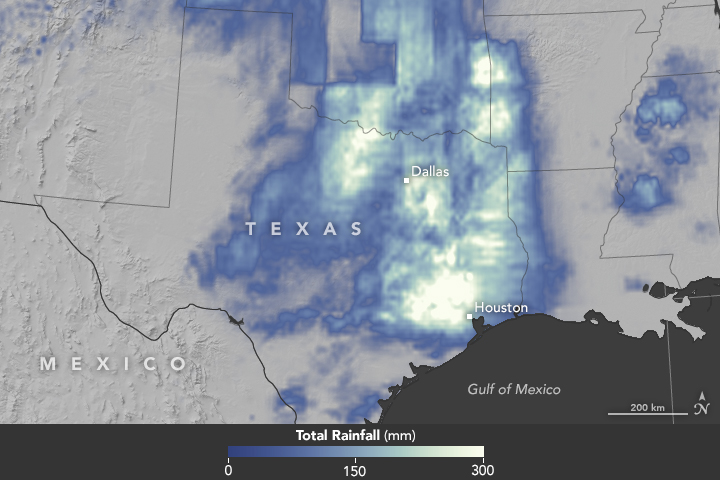 In late April 2016, record rainfall fell in the Houston area, and some areas received nearly a season’s worth of rain in one night. The deluge led to deadly flooding, and nine counties were declared to be in a state of disaster.

The map above shows a satellite-based estimate of rainfall over Texas on April 15-18, 2016. The data come from the Integrated Multi-Satellite Retrievals for GPM (IMERG), a product of the Global Precipitation Measurement mission. The brightest shades on the maps represent rainfall totals of at least 300 millimeters (12 inches) during that period. Blue areas saw less rain, and gray areas received no rain. These regional, remotely-sensed estimates may differ from the totals measured by ground-based weather stations.

Rain fell in two main waves: the first storm system paused over the area late on April 17, and the second moved slowly across the region early on April 18. For storms like this one to form, conditions in the atmosphere have to come together in just the right way. A bubble of high pressure blocked the eastward advance of a low pressure system and caused storm systems to stall. Fed by moisture moving north from the Gulf of Mexico, thunderstorms grew over Texas and delivered the intense rainfall.

On April 18, a record was set at George Bush Intercontinental Airport—Houston’s official observation site since 1969. According to the National Weather Service, ground-based measurements indicate that 9.92 inches fell on that day, breaking the record of 8.16 inches set in 1976. It also made April 2016 the wettest April ever measured at that site.

On April 20, the flash flood watch issued for parts of Southeast Texas was cancelled as storms moved out of the area. The forecast indicated, however, that more thunderstorms and showers were possible on April 21. 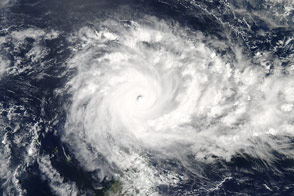