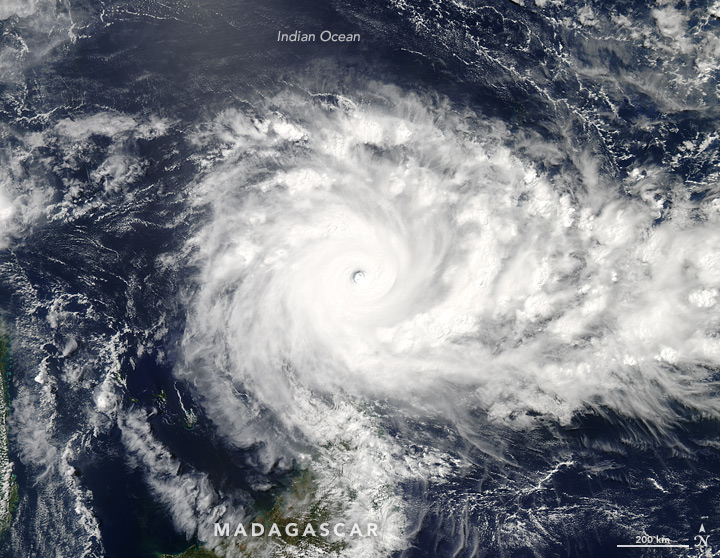 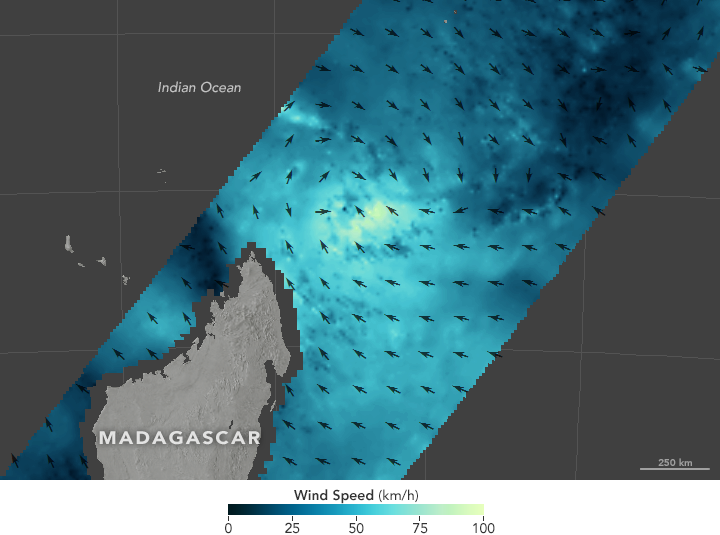 In October 2015, the Northeast Pacific Ocean produced its most potent hurricane on record: Patricia. In February 2016, Cyclone Winston pounded Fiji as the strongest storm in the Southwest Pacific. Now the Indian Ocean has a new record-breaker.

In a year with one of the strongest El Niños ever observed and the hottest air temperatures on record, Cyclone Fantala just became the most potent cyclone ever recorded in the Indian Ocean. (Note: Reliable records only date back to 1990.) From April 15 to 18, the storm hovered between category 4 and 5 while drifting northeast of Madagascar.

Wind speeds reached an estimated 150 knots (170 miles or 280 kilometers per hour) on April 18, as reported by the Joint Typhoon Warning Center. That record was set just a few hours before the Moderate Resolution Imaging Spectroradiometer (MODIS) on NASA’s Aqua satellite acquired a natural-color image (above) of Fantala at 1:25 p.m. local time (10:25 Universal Time) on April 18, 2016.

The second image shows wind speed and direction near the ocean surface as measured from space in the late morning on April 17, 2016. The measurements were taken by the International Space Station-Rapid Scatterometer (ISS-RapidScat), which bounces microwave pulses off the ocean and measures the roughness of the surface. Rough waters are disturbed more by wind and return a stronger signal than smooth waters; from this information, scientists can derive speed and direction. Shades of blue-green indicate the range of speeds, with lighter shades representing stronger surface winds.

Fantala was downgraded to a category 3 storm on April 19. The storm is not expected to make landfall; instead, forecasters project that it will drift southeast for a day or two, then northwest again. In the process, the storm should churn up enough cold water and run into other weather fronts that will sap it of energy.

The category 5 storm became the most intense on record for the Indian Ocean.