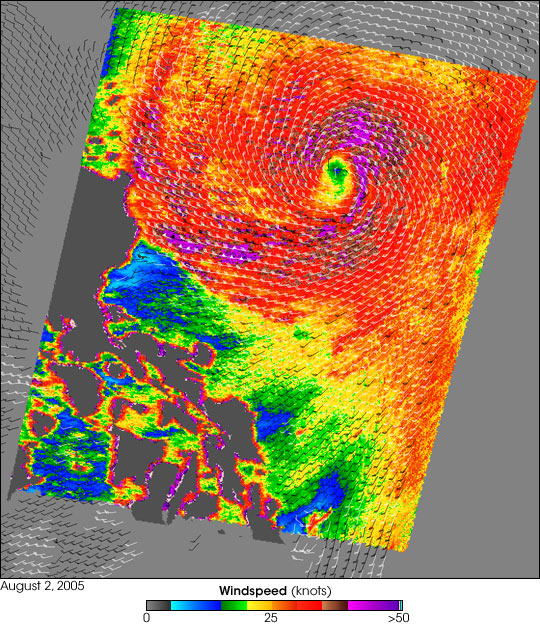 Typhoon Matsa is shown here as observed by NASA’s QuikSCAT satellite on August 2, 2005, at 08:46 UTC (16:46 in Manilla). At this time, the typhoon’s sustained winds reached 120 kilometers per hour (75 miles per hour or 65 knots), sufficient to upgrade it from a storm to a typhoon. The Philippines are located to the west of the storm, not far off the typhoon’s path at the time.

Measurements of the wind strength of Typhoon Matsa show sustained winds slightly higher than those shown by QuikSCAT observations. This is because the power of the storm makes accurate measurements difficult. The scatterometer sends pulses of microwave energy through the atmosphere to the ocean surface, and measures the energy that bounces back from the wind-roughened surface. The energy of the microwave pulses changes depending on wind speed and direction, giving scientists a way to monitor wind around the world.

Typhoon Matsa began forming in the northwestern Pacific off the Philippines and is gradually forming into a full fledged typhoon as the storm system travels north into the Yellow Sea.