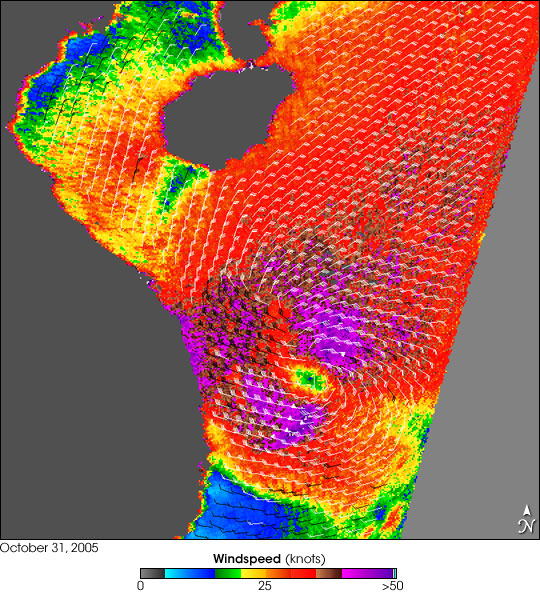 Typhoon Kai-Tak is shown here as observed by NASA’s QuikSCAT satellite on October 31, 2005, at 14:32 UTC (11:32 p.m. local time). At this time, the typhoon had sustained wind speeds near the storm’s center of 140 kilometers per hour (85 miles per hour; 75 knots). Typhoon Kai-Tak had reached its peak power a few hours earlier and was already starting to lose power as it was coming ashore on the Vietnam coastline.

Measurements of the wind strength of Typhoon Kai-Tak show sustained winds higher than those shown by QuikSCAT observations. This is because the power of the storm makes accurate measurements difficult. The scatterometer sends pulses of microwave energy through the atmosphere to the ocean surface, and measures the energy that bounces back from the wind-roughened surface. The energy of the microwave pulses changes depending on wind speed and direction, giving scientists a way to monitor wind around the world.

Typhoon Kai-Tak formed on October 29, 2005, in the South China Sea and rapidly built strength before threatening the mainland of Indochina.