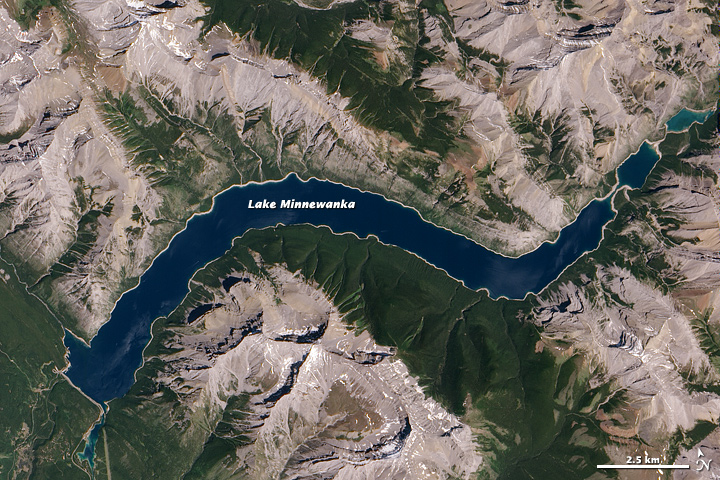 At the easternmost tip of Canada’s Banff National Park lies Lake Minnewanka. The lake fills a zigzagging valley just northeast of the city of Banff. Fed by the Cascade River, Minnewanka owes its existence to a succession of dams, the first built in 1895, the second in 1912, and the third in 1941. The second dam raised the lake’s level by 3.5 meters (12 feet), and the third dam raised water levels by 30 meters (100 feet).

The Advanced Land Imager (ALI) on NASA’s Earth Observing-1 (EO-1) satellite captured this natural-color image of Lake Minnewanka on July 1, 2009. Sunlight from the south leaves north-facing slopes in shadow. Away from the lake’s sapphire-hued waters, the land appears as a combination of gray, brown, and green. Vegetation lines the slopes at lower elevations, but much of the land in this image lies above the treeline. Treeless slopes rise above Lake Minnewanka in the north and the south. The off-white lake shores suggest that the lake was not completely full when ALI acquired this image.

The area has been shaped by a combination of rivers and glaciers. Beginning 25,000 years ago, the Bow Valley glacier ground through the region before being overtaken by a continental glacier. Besides the Bow Valley, evidence of glaciation also appears in this image south of the lake, in the amphitheater-shaped cirque.