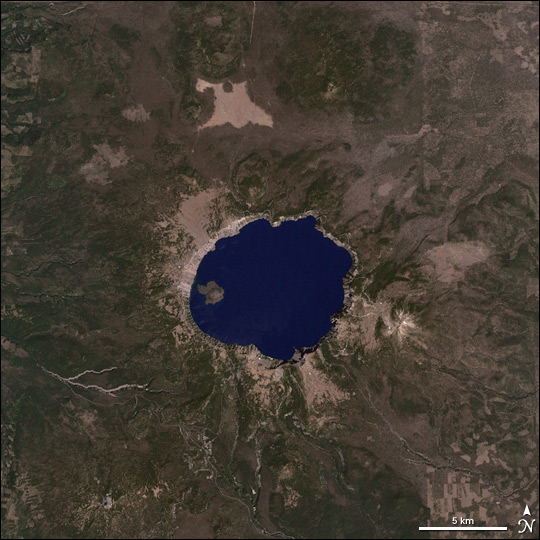 Crater Lake National Park is one of the oldest parks in the United States, created in 1902 by President Theodore Roosevelt. The first lodge in the park opened in 1915, and the Rim Drive around the lake gave the public easy access to the entire lake in 1918. Soundings of the lake show it is exceedingly deep, reaching as low as 1,943 feet (592 meters), making it the deepest lake in the United States. The lake is in the former caldera of Mount Mazama, which erupted around 7,700 years ago. Native American legends from the area include accounts of this eruption.

This Landsat 7 natural-color image of Crater Lake National Park shows the lake from an unusual perspective: directly above. The deep blue of the lake waters dominates the picture. In the western (left) side of the lake, the small island visible is Wizard’s Island. Wizard Island is a cone that was rebuilt by volcanic processes in the mountain after the eruption that formed the caldera. Utlimately, the volcano became dormant, with no measured activity in the past several thousand years. East of the lake, (a little south of 3 o’clock), is the other summit peak in the image, Mt. Scott, which has just a trace of snow on its peak.

The rim wall of Crater Lake is a natural barrier over which no river reaches. All the water in the lake comes from rainfall or snow that fell directly into the crater and accumulated over time. The only way water leaves the lake is through evapouration. Long rill-like features in grey and brown are the upper reaches of rivers which drain from the slopes of Mt. Scott. Rivers to the south and east drain into the Klamath River, while the strong grey features of larger streams to the west feed into the Rogue River. In this summer image, the deep green patches on the slopes of the mountain are evergreen forests while paler green shows other vegetation such as deciduous forest land. Outside the park, (for example, at the lower right corner) strong linear features show manmade structures and property boundaries between different agricultural activities.

The data were collected by Landsat 7’s Enhanced Thematic Mapper Plus (ETM+) instrument on August 17, 2000. The image was created by combining data from the red, green, and blue channels (ETM+ bands 3, 2, and 1 respectively) to show a natural-color view.