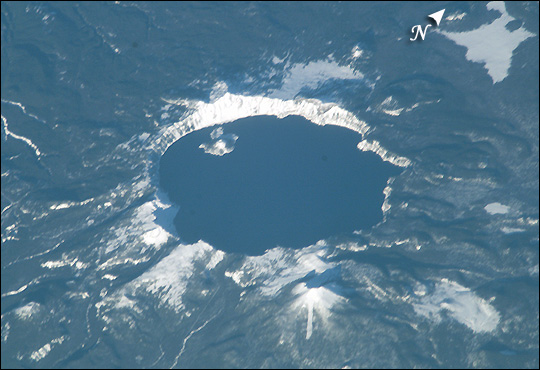 Crater Lake National Park celebrated its centennial in 2002, and is one of the nation’s oldest national parks. When Congress declared the area to be “dedicated and set apart forever as a public park or pleasure ground for the benefit and enjoyment of the people of the United States” in 1902, they could not have imagined that the landscape would inspire photographers viewing the Crater Lake from space.

Crater Lake, a volcanic caldera in South Central Oregon’s Cascade Mountains, boasts breathtaking scenery, created about 7,700 years ago with the volcanic eruption and subsequent collapse of the summit of Mt. Mazama. Today, the crater, about 8 km wide, contains the deepest lake in the United States — nearly 600 m (2000 ft) deep. The main source of the water in the lake is the annual snowfall of over 1300 cm (500 inches). When this image was taken from the International Space Station on January 6, 2003, nearly 180 cm (70 inches) of snow covered the ground.

Astronaut photograph ISS006-E-15238 was taken with the Electronic Still Camera equipped with a 800 mm lens, and is provided by the Earth Sciences and Image Analysis Laboratory at Johnson Space Center. Additional images taken by astronauts and cosmonauts can be viewed at the NASA-JSC Gateway to Astronaut Photography of Earth.