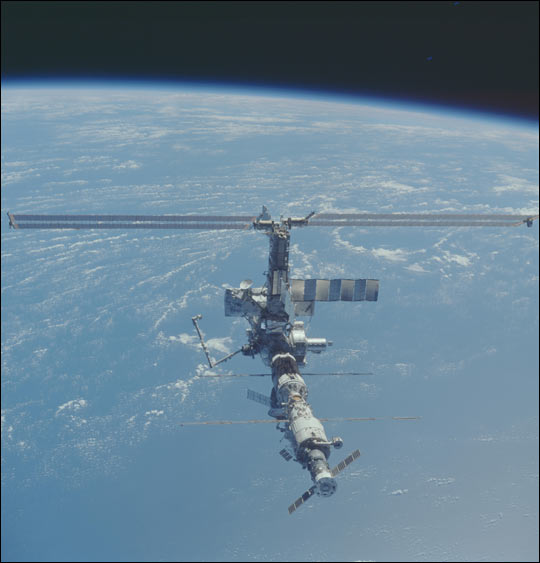 “Telecommuting to work” just took on a whole new meaning. Your teacher (or your child’s teacher) could soon be giving lessons from 240 miles (386 km) above the Earth aboard the International Space Station as part of NASA’s new Educator Astronaut Program. Announced on January 21, 2003, by NASA Administrator Sean O’Keefe and Florida First Lady Columba Bush, this new program is designed to provide teachers and students around the world with an out-of-this-world learning experience. (Click to read the full NASA press release.)

The above photo of the International Space Station was taken by an astronaut aboard the space shuttle on April 17, 2002. Although its construction is not yet complete, Space Station Alpha began operations in November 2000. It now serves as home to three astronauts as well as dozens of already ongoing science experiments. In November 2003, with the first flight of Educator-Astronaut Barbara Morgan, you can add “classroom” to the list of the space station’s purposes.

Under the new Educator Astronaut Program, NASA is recruiting teachers from across the United States to apply for a chance to become astronauts. The program’s goals are to generate renewed interest in science and mathematics, and to cultivate a new generation of scientists and engineers. Anyone who knows of a potentially qualified candidate may nominate teachers for the program via the Educator Astronaut Program Web site. The application deadline is April 30, 2003.

Anyone interested in more details on this program should click to read the program fact sheet. Here is a list of frequently asked questions with answers.

Astronaut photograph STS110-717-17 was taken with a 35 mm film camera and is provided by the Earth Sciences and Image Analysis Laboratory at Johnson Space Center. Additional images taken by astronauts and cosmonauts can be viewed at the NASA-JSC Gateway to Astronaut Photography of Earth