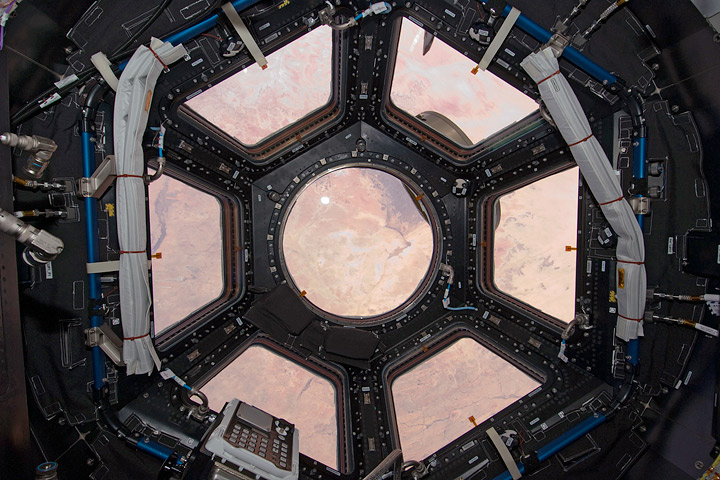 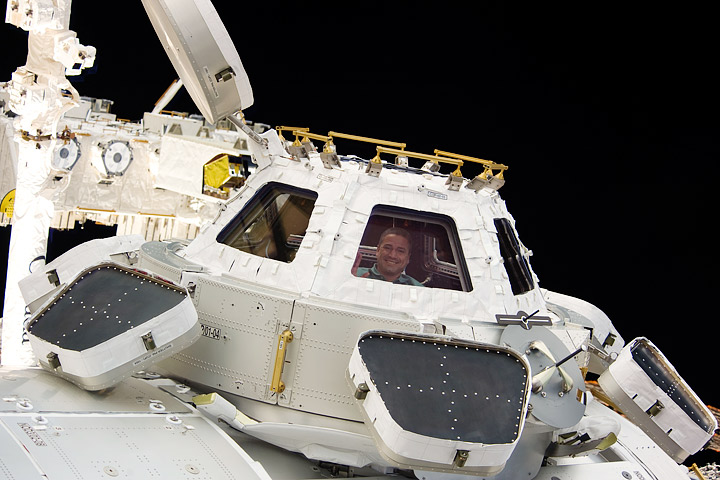 Astronauts onboard the International Space Station (ISS) have a new view of Earth after the space shuttle Endeavour delivered the Tranquility module to the station. Measuring 15 feet wide by 23 feet long, Tranquility holds some of the station’s environmental control equipment, such as the system that cleans carbon dioxide from the air, and it also provides living space for exercise equipment and a bathroom. Tranquility also comes with a cupola, a dome-shaped viewing port made up of seven windows.

Shortly after the shutters were removed from the windows on February 17, 2010, Japanese astronaut Soichi Noguchi took the top photo while looking out from the new cupola. The tan, brown, and orange Sahara Desert is visible through the windows. On February 19, an astronaut captured the bottom photo—looking into the cupola on STS-130 mission commander George Zamka, who was visiting the Space Station’s “new wing” while the shuttle was still docked to the station.

“The cupola is intended to enhance situational awareness for ISS operations like spacecraft docking, EVAs [Extra Vehicular Activities, spacewalks], and robotic operations,” says William Stefanov of the Image Science and Analysis Laboratory at Johnson Space Center, a lab set up to help astronauts take pictures of Earth that will be of greatest value to scientists and the public. Many of those activities require astronauts to control tools and machines remotely while watching their progress on a monitor. (Imagine trying to mow your lawn with a remote controlled lawnmower and a fixed video camera.)

But while the view out of Tranquility was primarily designed to give astronauts a way to see the outside of the station itself, it also provides a stunning panoramic view of Earth and space. “There is no intention to focus astronaut photography of the Earth through the cupola, but it will almost certainly be used for that purpose by crew members,” says Stefanov.

In an essay published on the Earth Observatory in October 2003, Astronaut Ed Lu described the experience of seeing the Earth from the International Space Station. “When I look out a window that faces straight down, it is actually pretty hard to see the horizon—you need to get your face very close to the window. So what you see out a window like that is a moving patch of ground (or water),” he wrote. ”When looking out a sideward facing window, you can see the horizon of the Earth against the black background of space.” The cupola will allow astronauts the luxury of both views at once.