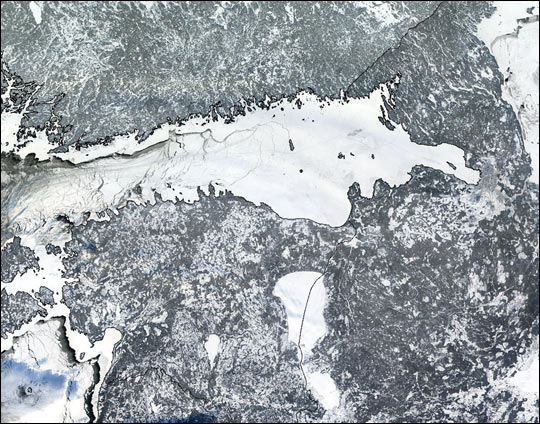 The bitter cold snap bearing down on northwest Russia and eastern Europe that has claimed many lives over the last few weeks has also locked the Gulf of Finland up in ice. This true-color Moderate Resolution Imaging Spectroradiometer (MODIS) image from January 10, 2003, shows the frozen Gulf, which is bound at north by Finland, at south by Estonia, and on the east by Russia. At the far eastern end of the Gulf lies the city of St. Petersburg, an important port for regional trade. Completely frozen by January 9, the port held 26 ships locked up in ice, while about 50 more that were bound for the port city were forced to remain at sea in the Baltic (image left), waiting for icebreakers to completely open the shipping lanes. The faint gray lines running across the Gulf (see high-resolution image) show the attempts by ice breakers to keep shipping lanes open and free the ships in St. Petersburg port. Reports from the local news indicated it would take weeks to free them.

The ice is not only unusually widespread, but thicker than normal, with depths reaching 80 centimeters (2.6 feet). There is concern that many ships are not prepared for such dangerous ice conditions, in particular oil tankers that may be damaged and begin to leak. Ice has not been this thick since 1941, and experts believe conditions will be unchanged for the next couple months. Even portions of the Baltic Sea are freezing, and some are speculating that this will be the first year the Sea has frozen over since 1948.