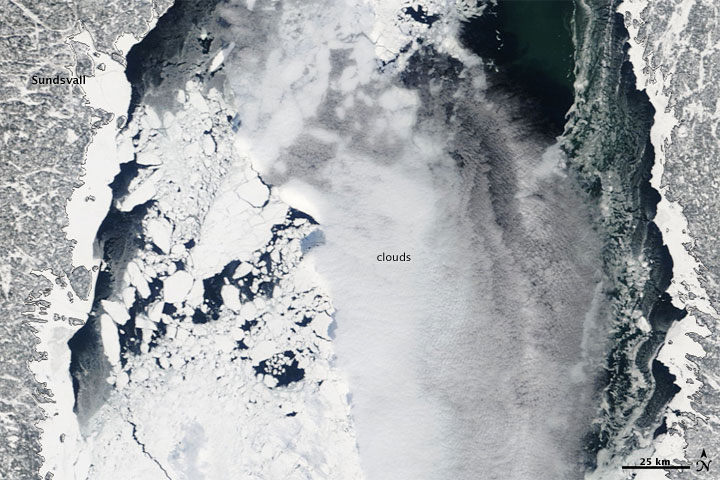 Thick ice stranded dozens of ships in the Baltic Sea in late February and early March 2010. By March 5, icebreakers had managed to free the vessels that collectively carried thousands of passengers, the Agence France-Presse reported.

The Moderate Resolution Imaging Spectroradiometer (MODIS) on NASA’s Terra satellite captured this true-color image of part of the Gulf of Bothnia on March 5, 2010. A thin black line delineates the coastline, much of which is lined by ice, particularly in the area around Sundsvall. Ice—largely broken into pieces of varying sizes—fills most of the gulf. A translucent veil of clouds partially hides the eastern half of the water body.

The attempts of two icebreakers to free some of the stranded ships on March 4 failed, requiring the stranded passenger and cargo vessels to await the arrival of an even larger icebreaker, the Ymer. The Ymer had been at work in the Gulf of Bothnia, freeing some 50 ships, one of them having been stuck since February 27. As of March 5, a dozen ships remained docked near the central port at Sundsvall, awaiting escort out of the area by the Ymer Icebreaker.

Thick ice stranded dozens of ships in the Baltic Sea in late February and early March 2010.