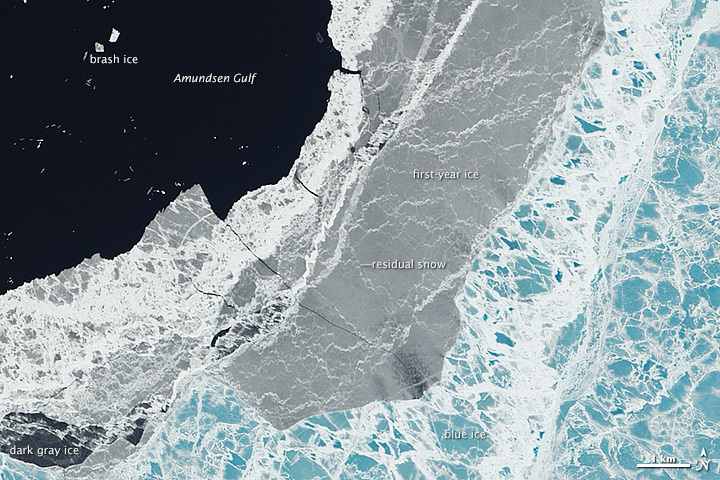 Today's story is part of our recent feature series Landsat Goes Over the Top: A Long View of the Arctic.

The summer of 2014 began with relatively cool temperatures in the Arctic, and the storms and winds that can break up ice were mostly absent, according to NASA ice scientist Walt Meier. But the long-term thinning of sea ice has made it more susceptible to melting, so the 2014 melt season concluded with the sixth-lowest ice extent of the modern satellite era.

Even in years with similar ice extents, the line traced around the edge of the sea ice can take on different shapes. Factors like winds and even the topography of the sea floor can affect the location and extent of Arctic ice.

The Operational Land Imager (OLI) on Landsat 8 acquired this image of an interesting sea ice edge on June 21, 2014, the first day of summer. The scene shows a part of the Amundsen Gulf, between Canada’s Victoria Island and the mainland, that opens to the Beaufort Sea to the west. The gulf forms the westernmost section of the Northwest Passage, which opened during the low-ice year of 2007, but remained ice-bound in 2014.

The close-up view of the ice shows a wide range of sea ice types. Blue ice in the lower right corner is thicker ice that is several years old; it contains fewer and smaller pockets of air that would normally cause ice to reflect blue light. Adjacent to the open water of the Amundsen Gulf is first-year ice, which grows in just one winter. The dark grey ice is even younger and thinner, and might represent an area of recently open water that refroze. Finally, brash ice—wreckage of various ice types afloat in the water—is seen drifting in the gulf’s open water. Snow on top of the sea ice accounts for some of the white areas.