Fires in the Australian Capital Territory 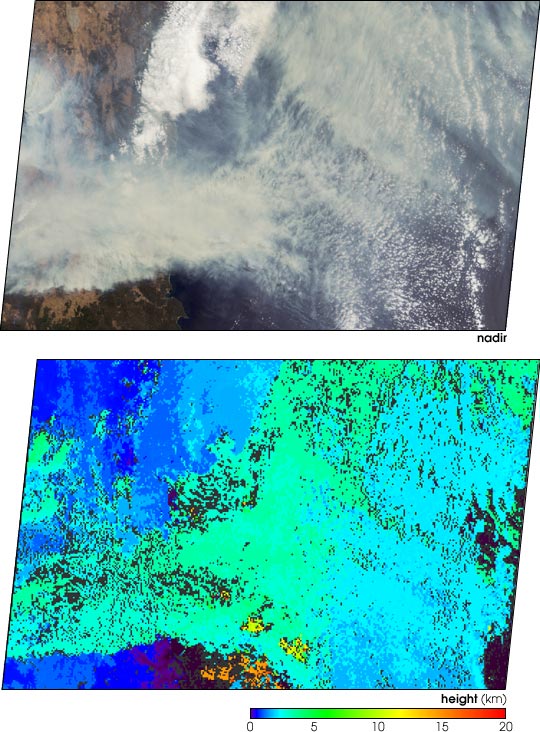 The height and extent of billowing smoke plumes from bushfires near Canberra, the Australian capital, are illustrated by these views from the Multi-angle Imaging SpectroRadiometer (MISR). The images were acquired on January 18, 2003. Never before had fires of this magnitude come so close to Australia’s capital. Four people lost their lives and over 500 homes were destroyed, mostly in the southwestern suburbs. Australia’s famous Mount Stromlo Observatory, located immediately west of the city, was also incinerated by the fires.

The lower panel provides a stereoscopically retrieved height field of the clouds and smoke plumes. The greenish areas indicate where smoke plumes extend several kilometers above a bank of patchy stratus clouds below. A few high clouds appear near the bottom of the image. Wind retrievals were excluded from this image in order to generate a smooth and continuous field. Although relative height variations are well-represented here, the inclusion of wind retrievals for this scene reduces the actual cloud height results by 1 to 2 kilometers. Areas where heights could not be retrieved are shown as dark gray.

The Multi-angle Imaging SpectroRadiometer observes the daylit Earth continuously and every 9 days views the entire globe between 82 degrees north and 82 degrees south latitude. The MISR Browse Image Viewer provides access to low-resolution true-color versions of these images. This data product was generated from a portion of the imagery acquired during Terra orbit 16421. The panels cover an area of 380 kilometers x 253 kilometers, and utilize data from blocks 118 to 120 within World Reference System-2 path 89.