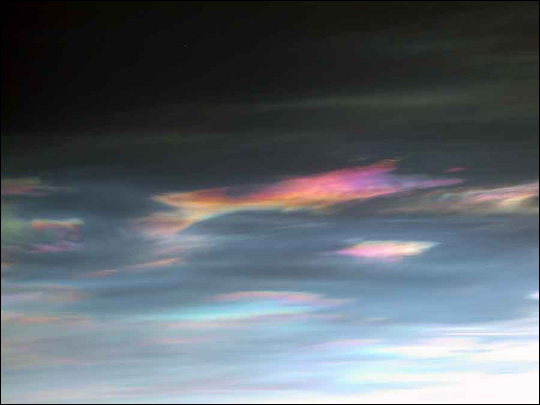 Though the pink cloud in the above image may look harmless, it is anything but. This cloud is known as a polar stratospheric cloud (PSC), and it and others like it are responsible for ozone loss in the stratosphere. Such clouds form in the stratosphere over higher latitudes in temperatures sometimes below -120 degrees Fahrenheit (-83 degrees Celsius). Chemical processes within these unusual clouds convert chlorofluorocarbons, such as those produced by older air conditioning systems and aerosol spray cans, into free radicals that destroy stratospheric ozone. Such chemical reactions have given rise to the ozone hole over the Antarctic, and scientists are now concerned about thinning of the ozone layer over the North Pole as well. Since stratospheric ozone blocks harmful, cancer-causing, solar ultraviolet radiation, the thinning of the ozone in both hemispheres threatens the health of both our environment and ourselves.

The above image was taken aboard NASA’s DC-8 in southern Scandinavia on January 14, 2003. NASA's DC-8 is a flying laboratory filled to the brim with scientific instruments that can monitor the chemistry and climate conditions in the upper atmosphere. The DC-8 is being used in conjunction with satellites, weather balloons, and other aircraft as part of the NASA-funded SAGE III Ozone Loss and Validation Experiment (SOLVE II) campaign, which will run from January 8 to Febuary 6 of this year. The goal of this campaign is to observe the processes behind stratospheric ozone creation and loss in the Arctic Circle.