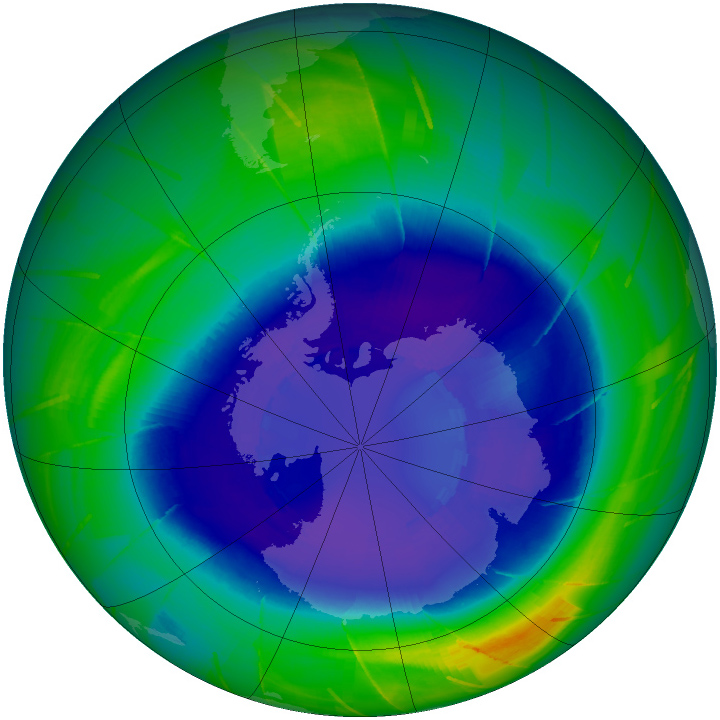 The annual ozone hole started developing over the South Pole in late August 2009, and by September 10, it appeared that the ozone hole of 2009 would be comparable to ozone depletions over the past decade. This composite image from September 10 depicts ozone concentrations in Dobson units, with purple and blues depicting severe deficits of ozone. The image was made from data collected by the Ozone Monitoring Instrument onboard NASA’s Aura satellite.

“We have observed the ozone hole again in 2009, and it appears to be pretty average so far,” said ozone researcher Paul Newman of NASA’s Goddard Space Flight Center in Greenbelt, Maryland. “However, we won’t know for another four weeks how this year’s ozone hole will fully develop.”

September 16 marks the International Day for the Protection of the Ozone Layer, declared by the United Nations to commemorate the date when the Montreal Protocol was signed to ban use of ozone-depleting chemicals such as chlorofluorocarbons (CFCs).

The depth and area of the ozone hole are governed by the amount of chlorine and bromine in the Antarctic stratosphere. Over the southern winter, polar stratospheric clouds form in the extreme cold of the atmosphere, and chlorine gases react on the cloud particles to release chlorine into a form that can easily destroy ozone. When the sun rises in August after months of seasonal polar darkness, the sunlight heats the clouds and catalyzes the chemical reactions that deplete the ozone layer. The ozone hole begins to grow in August and reaches its largest area in late September to early October.

Recent observations and several studies have shown that the size of the annual ozone hole has stabilized and the level of ozone-depleting substances has decreased by 4 percent since 2001. But since chlorine and bromine compounds have long lifetimes in the atmosphere, a recovery of atmospheric ozone is not likely to be noticeable until 2020 or later.

Visit NASA’s Ozone Watch page for current imagery, data, and animations of the year to date.