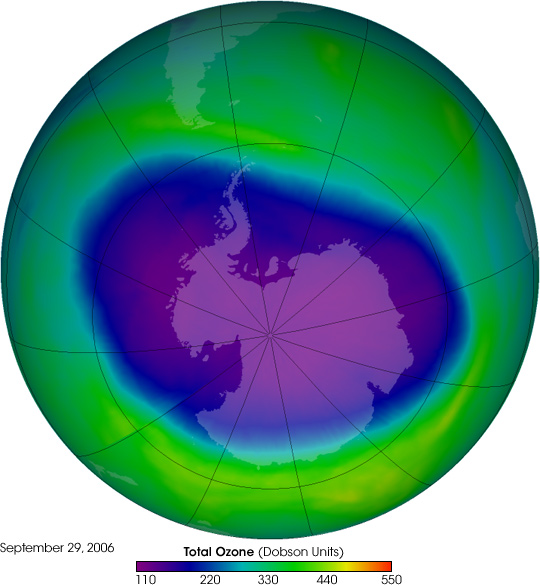 When daylight returns to the South Pole after the total darkness of the polar winter, it sets off a series of chemical reactions that destroy ozone in the stratosphere. As spring progresses in the Southern Hemisphere, NASA satellites observe the resulting development of the Antarctic “ozone hole,” an area of exceptionally low concentrations of stratospheric ozone. The hole begins to develop in mid-August each year and peaks in late September or early October. As summer approaches, weather conditions become less favorable for the ozone-destroying reactions, and the ozone layer stabilizes until the next spring.

This image from September 29, 2006, shows the ozone concentration in the stratosphere above the South Pole observed by the Ozone Monitoring Instrument on NASA’s Aura satellite. Greens and yellows show areas with the highest ozone amounts, while blues and purples show where ozone amounts are lowest. A purple veil of extremely low levels of ozone stretches across most of Antarctica, which is roughly centered in the image.

Scientists generally use Dobson Units to describe ozone concentrations. Ozone in the atmosphere isn’t packed into a single layer at a certain altitude above the Earth’s surface; it’s dispersed. The Dobson Unit describes how much ozone there would be in a column of the atmosphere if all the molecules were squeezed into a single layer. One Dobson Unit is the number of molecules of ozone that would be required to create a layer of pure ozone 0.01 millimeters thick at a temperature of 0 degrees Celsius and a pressure of 1 atmosphere (the air pressure at the surface of the Earth).

The average amount of ozone in the atmosphere is roughly 300 Dobson Units, equivalent to a layer 3 millimeters (0.12 inches) thick—the height of 2 pennies stacked together. Any place where the concentration drops below 220 Dobson Units is considered part of the ozone hole. Average ozone concentrations in the ozone hole are around 100 Dobson Units—about the height of a dime. Stratospheric ozone absorbs ultraviolet (UV) light that can be dangerous to living things. A thinner ozone layer increases humans’ and other creatures’ exposure to harmful UV light.

NASA measurements made by aircraft- and ground-based sensors in the 1980s provided much of our initial understanding of the extent of the ozone hole and its link to the chemicals known as chlorofluorocarbons (CFCs), which human activities were releasing into the atmosphere. In 1987, the Montreal Protocol banned the worst of the ozone-destroying chemicals. Today, NASA scientists are using the latest tools—including satellite observations and computer models of atmospheric chemistry and weather—to determine what effect the ban on CFCs and related chemicals has had and how long we will have to wait for a full ozone layer recovery. NASA shares the latest information and satellite images of the ozone hole with the public on its Ozone Watch Website.