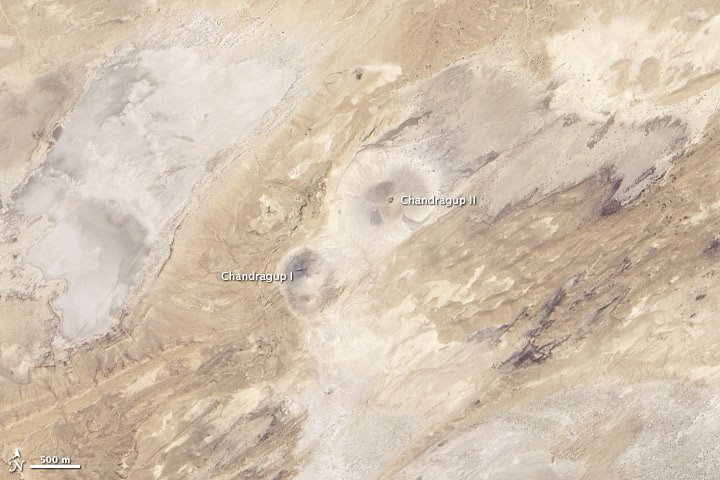 Along the coast of Pakistan, the tectonic plate underlying the Arabian Sea is diving beneath the Eurasian continent. This process—subduction—typically creates volcanoes, but the volcanoes that rise from this arid landscape are not the typical kind. Instead of lava, ash, and sulfur dioxide, these volcanoes spew mud and methane. On rare occasions, the gas plumes spontaneously ignite, shooting flames high into the sky.

This natural-color image shows the most dramatic group of mud volcanoes in the area, known as the Chandragup Complex. The tallest volcano, Chandragup I, is about 100 meters (330 feet) high, and it has a 15-meter- (49-foot-) diameter mud lake in its crater that periodically overflows. Some of these overflows have darkened the northwestern flanks. A second crater emerges from the southern flanks of Chandragup, but it is not currently active.

The 45-meter (150-foot) Chandragup II lies northeast of the taller cone, and its crater is filled by a mud lake with a figure-8 shape, probably the result of twin volcanoes whose craters collapsed into each other over time. To the northwest of Chandragup I, the eroded rim of an extinct mud volcano is visible; its eastern rim is more noticeable than its western rim.

This image was captured by the Advanced Land Imager on NASA’s Earth Observing-1 (EO-1) satellite.

This image from February 11, 2010, shows several mud volcanoes that rise from the desert landscape of southern Pakistan, along the coast of the Arabian Sea.