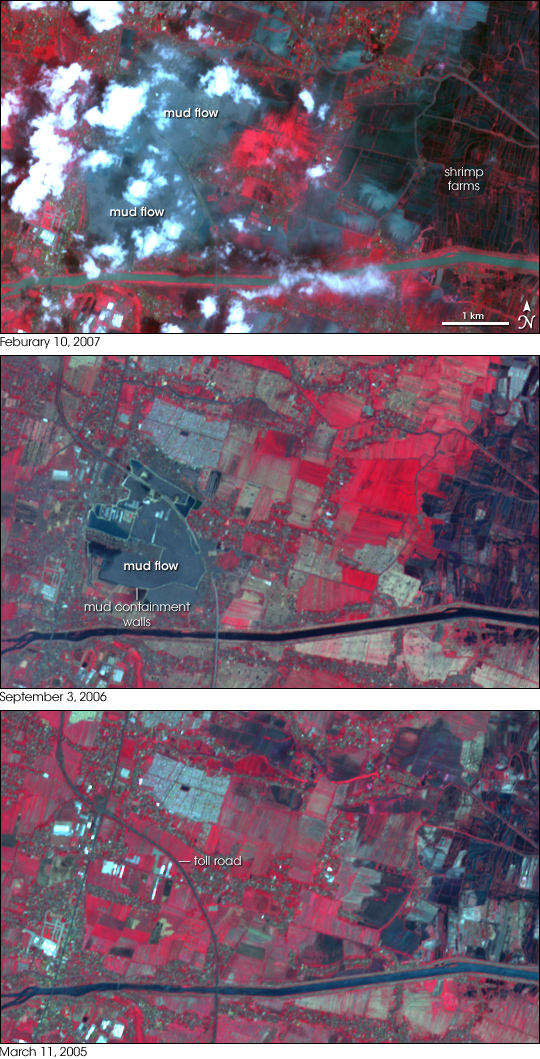 On the island of Java, a “mud volcano” has been spewing thousands of cubic meters of mud every day since late May 2006. According to BBC news, British geologists believe that oil and gas drilling ruptured pressurized limestone rock and enabled water and mud to reach the surface. The oil company and others have suggested that the event could be related to the May 27 earthquake near Yogyakarta. Regardless of the cause, the volcano has become a major hazard, creating a huge mud lake that buried villages and agricultural land.

These images from the Advanced Spaceborne Thermal Emission and Reflection Radiometer (ASTER) on NASA’s Terra satellite show the progression of the mud flow from September 3, 2006, (middle) to February 10, 2006 (top). The bottom image, acquired on March 11, 2005, shows how the area looked before the mud flow began. In these infrared-enhanced, “false-color” images, bare ground appears gray, water appears dark blue, and vegetation appears red. Robust vegetation appears bright red. Although clouds partially obscure the February 10 image, the mud flow’s advance can still be detected. In this image, the mud flow has spread beyond the toll road toward the east. Areas of robust vegetation in this image are smaller, although that could be partially due to a difference in season.

A scientific survey published in the Geological Society of America’s February issue of GSA Today stated that the mud volcano could release between 7,000 and 150,000 cubic meters of mud every day for years. According to Reuters, there was concern that mud might pollute the water, damaging the area’s shrimp industry. In an attempt to slow the mud flow, the Indonesian government has approved a plan to drop concrete balls linked by heavy chains into the mouth of the volcano, according to news reports.