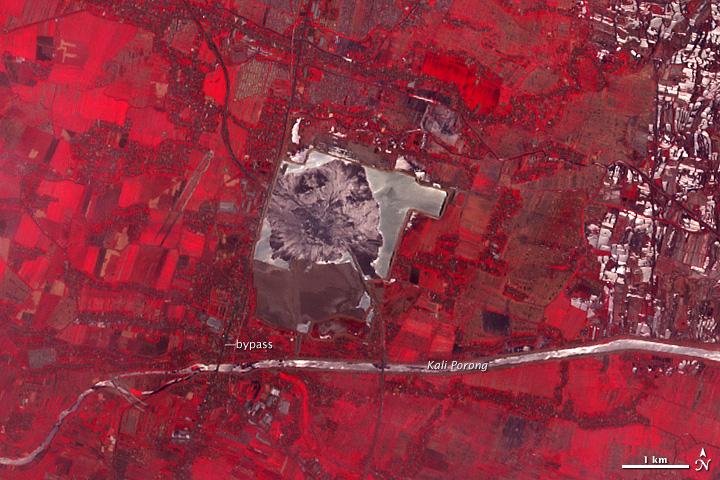 On May 29, 2006, hot mud began to pour from the ground near a gas exploration well, covering fields and villages in the Sidoarjo region of East Java, Indonesia. Despite efforts to staunch the flow, the mud kept coming, forming the world’s largest and fastest growing mud volcano. By the time the Advanced Spaceborne Thermal Emission and Reflection Radiometer (ASTER) on NASA’s Terra satellite captured this false-color image on October 20, 2009, the erupting mud truly resembled a volcano.

Walls contain the mudflow to a rectangular region in the center of the image. The landscape beyond the walls is still covered in plants, which are red in this false-color image. Water, usually dark blue in this type of image, is silvery white from reflected sunlight. The bright squares on the right side of the image are shrimp farms, and the ribbon of white along the bottom of the image is the Kali Porong, a river. Reflecting sunlight also colors the outer edges of the mudflow silver and highlights the texture of the growing mound over the vent at the center of the volcano. The mound was not visible in an ASTER image acquired in late 2008.

Called Lusi, the volcano formed suddenly in May 2006 probably because of drilling at the nearby gas well, say scientists from Indonesia, the United Kingdom, the United States, and Australia. The day before the eruption, pressurized gas and fluid flowed into the well, raising the pressure. The fluid and gas escaped into the surrounding earth, forcing mud to the surface along nearby cracks. As of June 2008, as much as 100,000 cubic meters of mud flowed from the volcano every day. This image shows that the eruption continued into 2009.

Lusi’s formation forced more than 30,000 people from their homes, destroyed more than 10,000 homes, schools, and other structures, and may have a wider impact on coastal and marine ecosystems.