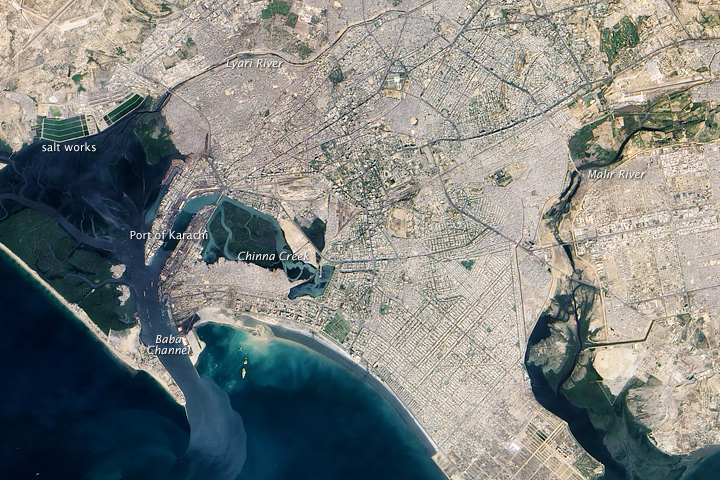 A centuries-old settlement that now ranks among the world’s largest, Pakistan’s seaport city of Karachi mixes intense urbanization with remnants of a natural environment. The Advanced Land Imager (ALI) on NASA’s Earth Observing-1 (EO-1) satellite captured this true-color image of Karachi on January 8, 2010. It shows the southwestern edges of the city, where mangroves and river deltas mix with ports and pavement.

Two rivers, the Lyari and Malir, pass through Karachi en route to the Arabian Sea. The Lyari River passes north of the Port of Karachi, and expansive salt works, appearing as large geometric areas of green, line the northern edge of that river’s delta. East of the port, the Malir River flows southward toward the sea. Emptying through a narrower delta, the Malir River is nevertheless more conspicuous than its neighboring waterway; the river is wider, and the corridor of vegetation along its banks extends farther out into the city.

Karachi’s port does not open directly to the Arabian Sea. Between the port and the ocean, a barrier island runs northwest-southeast (shown along the left edge of the image). East of this island and west of the port sits a large expanse of water and mangroves. Water in the Lyari River Delta must empty into the sea through the Baba Channel. (Tiny, oblong slivers in the channel are probably large ships.) Sediment colors the water flowing through that channel a lighter color than the surrounding ocean. Immediately east of the Port of Karachi lie two more mangroves, the larger of which is named Chinna Creek.

Away from the coastal mangroves, cityscape predominates. Many of Karachi’s oldest structures and most popular tourist attractions appear in the city center just northeast of the port, but street grids cover almost all of the available land outside of the mangroves. According to census statistics from 2000 to 2005, Karachi had a population of over 12 million inhabitants in 2006, and it was expected to maintain a high growth rate over the next decade.