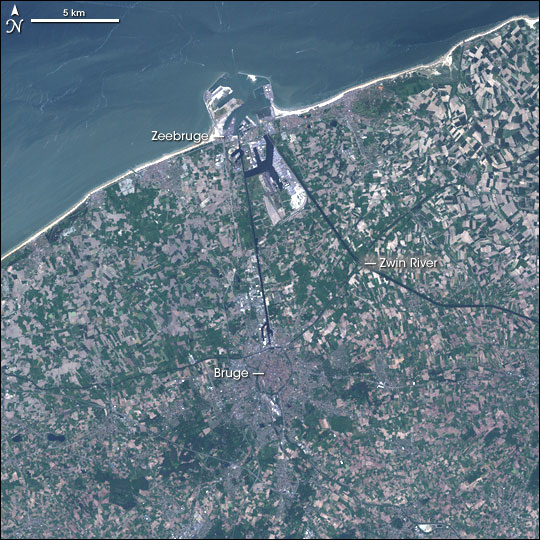 Just a few kilometers inland from the North Sea coast of Belgium lies the popular tourist city Bruge (spelled Brugge in Flemish, and sometimes also in English). Its popularity stems from a stunning collection of architecture, canals, and art dating from medieval times. At one time Bruge was a major center of trade, but it suffered a gradual economic decline through the 1500s. The city’s “neglect” became a major asset in the modern era of easy global travel and tourism. Today, millions visit the city each year to enjoy the extraordinarily well-preserved feel of a town reaching back through centuries of history.

This natural-color Landsat 7 image was collected by the Enhanced Thematic Mapper Plus (ETM+) instrument on May 23, 2001. The modern city of Bruge appears in the image as a grey area with a roughly circular center that is ringed by a canal, which was made by the reshaping of the Reie River. This canal encircles the limits of the old city, and it connects to smaller canals threading through the city. The ring canal connects with the Zwin River to the northeast at Damme. Near the coast, the very large, Y-shaped, Boundewijn Canal leads north to the port of Zeebruge and to the North Sea. Surrounding Bruge is the Flanders countryside, a very flat, fertile plain. The fields make a tan and green checkerboard.

The rivers and canals are directly related to the rise and fall of the prominence of Bruge. The town already existed in 1134 when a storm flooded the coastal plains and dramatically reshaped Flanders. The storm scoured a deep passage in the existing Zwin River which ran near Bruge, giving access to the North Sea. The connection to the sea allowed Bruge to rapidly develop into a major center for export of goods from throughout Europe. Through the 1200s to the 1500s, Bruge’s economy continued to grow.

However, the flatness of the plains of Flanders meant that the Zwin River was not a swift-flowing river. Eventually silt deposits began to choke the Damme and Bruge port facilities, and the city fell into economic decline. While it continued to be an important city for some time to come, other cities with better port access came to dominate.

By the early 20th century, Bruge was a relatively quiet city. King Leopold ordered a major new canal to reshape the Zwin River and connect it to Bruge through a new major canal. This effort also created a new port city on the modern coastline, Zeebruge (roughly translated, “Bruge on the Sea”). However, the prevalence of railway transportation by this time meant that Zeebruge did not revitalize the city in the manner that the 1134 storm had done.