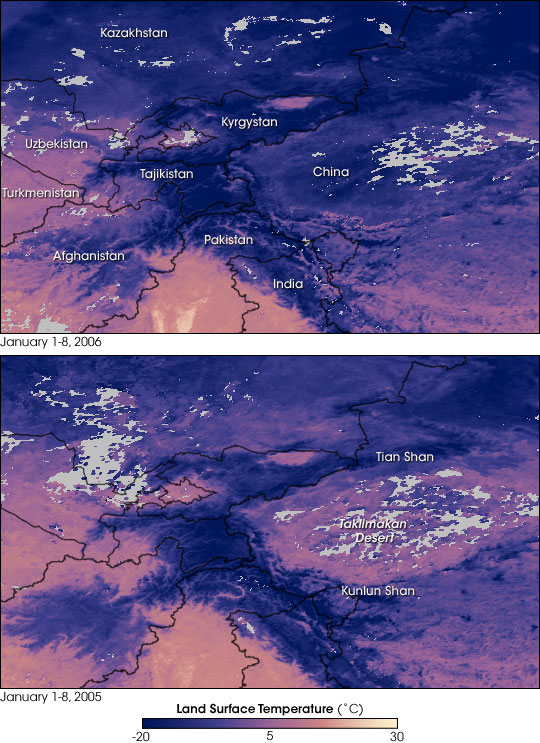 The bitter cold of winter settled ferociously over the interior of Asia during the first week of 2006. A large mass of Siberian air swept as far south as India and as far east as Japan, enveloping much of Asia with uncommonly low temperatures. In many places, the cold weather was accompanied by crippling snow. Among the most severely affected were the 200,000-plus people stranded in northwestern China when heavy snow fell over the region, reported United Press International. The cold snap also levied a heavy toll on northern India, where an estimated 200 had died of the cold as of January 9, said the BBC.

In January 2006 (top), large sections of China were significantly colder than they were in 2005 (bottom). The Taklimakan Desert formed a warm pink and purple oval surrounded by the cold blue of the Kunlun Shan and Tian Shan mountain ranges in the 2005 image. One year later, the desert is the dark blue of intense cold. To the north of the desert, where most of the people affected by snow in China live, the warmer purple tones that marbled the region in 2005 are gone, replaced with colder blue tones. In both images, areas that were cloudy throughout the eight-day period are gray.

A strong snowstorm has dropped heavy snow throughout Central Asia, causing more problems for the region devastated by the Pakistan earthquake in October 2005.

Biting cold seized much of southwest Asia throughout January and into February 2008. Land surface temperatures were as much as 20 degrees Celsius cooler than in previous years. The overall blue tone of the image reveals cold temperatures throughout the region, but the most intense cold was in Iran, Afghanistan, Turkmenistan, Uzbekistan, and Tajikistan.