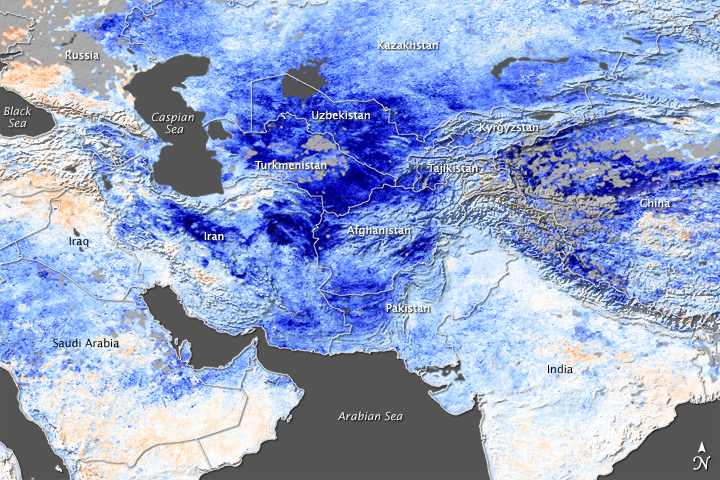 The extreme winter conditions were the worst in decades in both Afghanistan and Tajikistan. In Afghanistan, the cold left more than 750 people and 230,000 cattle dead, reported Reuters. Many families rely on cattle for food security, and their loss will likely cause great hardship. Tajikistan was similarly taxed by the severe cold. Even as cold temperatures increased the demand for electricity, power production decreased when inlet streams feeding hydroelectric power plants froze, said the United Nations Office for the Coordination of Humanitarian Affairs on February 11. Tajikistan derives 76 percent of its electricity from hydropower, said the UN. The power shortages left urban areas without heat.

Biting cold seized much of southwest Asia throughout January and into February 2008. Land surface temperatures were as much as 20 degrees Celsius cooler than in previous years. The overall blue tone of the image reveals cold temperatures throughout the region, but the most intense cold was in Iran, Afghanistan, Turkmenistan, Uzbekistan, and Tajikistan.