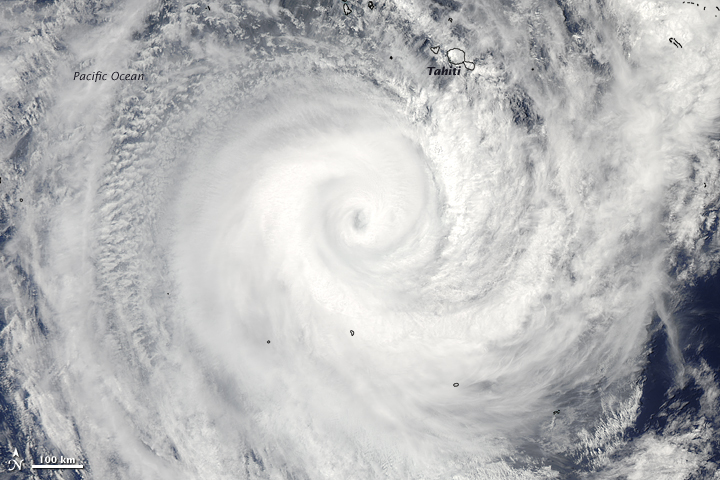 Cyclone Oli was a Category 4 storm on February 4, 2010, when the Moderate Resolution Imaging Spectroradiometer (MODIS) on NASA’s Aqua satellite captured this true-color image. The powerful storm was moving southeast across the South Pacific over the French Polynesian Islands. Tahiti, the most populous of the islands, is under the outer edge of the storm in the upper right.

According to the Joint Typhoon Warning Center, Oli had winds of 213 kilometers per hour (132 miles per hour or 115 knots) at 1:40 p.m., local time, when this image was acquired. Forecasters expected the storm to weaken as it continued to move south over cooler waters.

At least 3,400 people were evacuated from Tahiti and nearby islands as Oli approached, reported BBC News. The storm’s strong winds damaged homes and power lines. One person died and several others were injured in the storm, said BBC News.

The highest resolution version of the image is provided above. The image is available in additional resolutions from the MODIS Rapid Response System.

Comma-shaped Cyclone Oli was a formidable Category 4 cyclone moving over French Polynesia in the South Pacific when this true-color image was captured on the afternoon of February 4, 2010.

Topical Cyclone Rene was moving over the Pacific Island nation of Niue when this true-color image was taken on the afternoon of February 14, 2010.