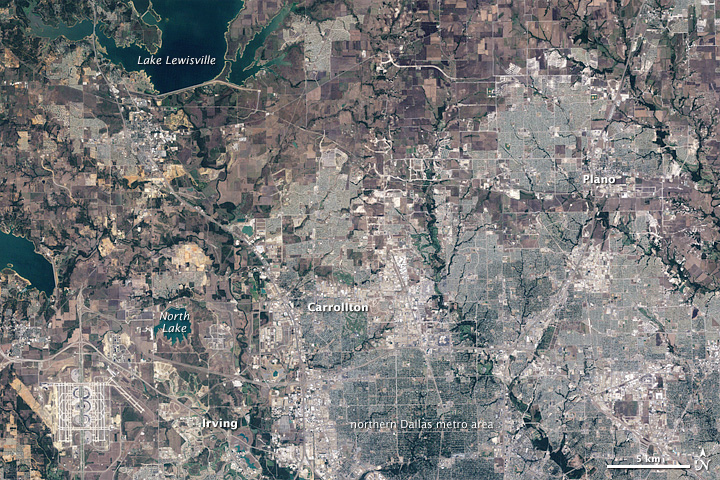 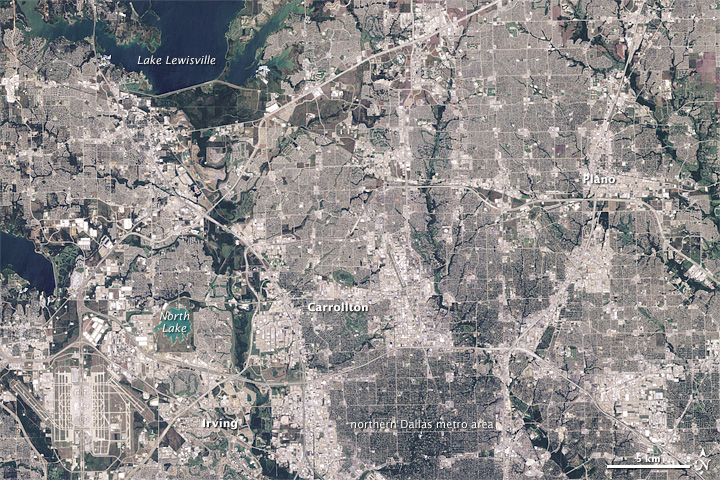 Historically, as suburbs of big cities grew, they developed into small versions of their parent city, complete with their own urban core: a downtown business and shopping district surrounded by high-density housing. In the late twentieth century, however, the “boomburb” emerged. Boomburbs are suburbs with populations over 100,000 that are experiencing double-digit growth rates. Lacking a true downtown, their growth is sprawling: strip development along highways backed by large-lot subdivisions.

NASA’s Landsat 5 satellite captured these images of three boomburbs—Irving, Carrollton, and Plano—along the northeastern margin of the Dallas Metropolitan area. Between August 31, 1984 (top), and August 4, 2009 (bottom), each of these suburbs grew explosively, filling in the patchwork of agricultural lands to the north and west of Dallas. Irving expanded westward to the Dallas-Fort Worth airport and northward to North Lake. Carrollton grew northwest toward Lake Lewisville, while Plano completely filled the territory between two tree-lined creeks.

With the exception of Chicago, American boomburbs are a phenomenon of the South and West. Of All American cities, Phoenix, Arizona, is the one with the largest percentage of its metro population (42 percent) living in boomburbs. Phoenix’s fastest-growing boomburb (as of the 2000 census) was Chandler.