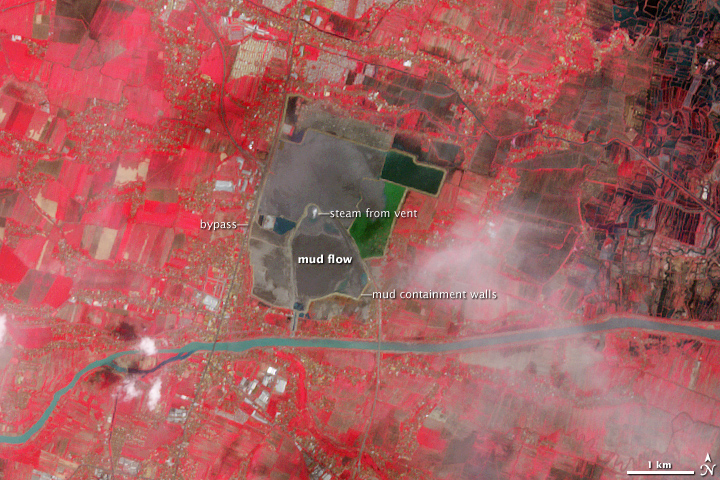 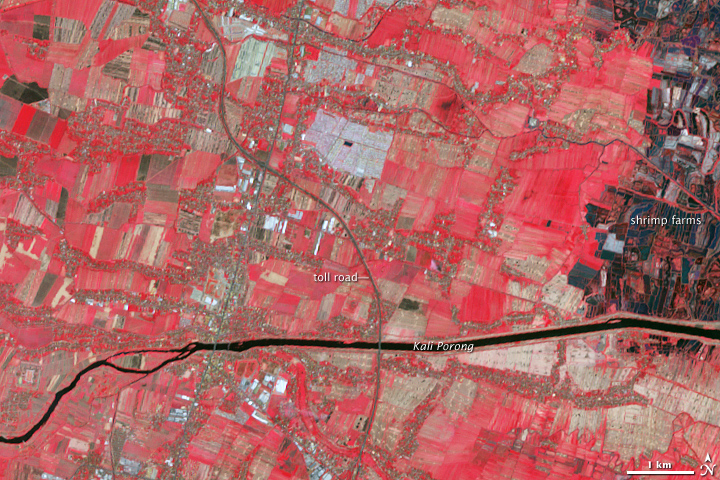 On May 29, 2006, a scalding mud volcano began erupting in a densely populated area in eastern Java, Indonesia. In the months that followed, the Sidoarjo mud flow (also known as the Lapindo mud flow, or Lusi) showed no signs of slowing, and mitigation efforts such as dropping chains of concrete balls down the crater proved ineffective. By September 2006, the mud had breached some early containment walls and sprawled across a nearby toll road. The mud’s footprint continued growing in February 2007. By June 2008, the massive mud lake spawned by this eruption had smothered a dozen villages and displaced some 30,000 residents.

Despite its destructive history, however, the Sidoarjo mud flow appeared contained by levees in November 2008. The Advanced Spaceborne Thermal Emission and Reflection Radiometer (ASTER) on NASA’s Terra satellite acquired these images on November 11, 2008, (top) and August 24, 2004 (bottom). In these false-color images, red indicates vegetation, pale blue and green indicate bare ground and/or fallow fields, and black indicates water. The mud from the volcano appears charcoal gray.

In the image acquired in November 2008, more than two years after the eruption began, the mud volcano dominates the scene. A network of levees around the volcano contains most of the mud. On the eastern side of the levee network, the contained material appears deep blue or green, suggesting that these sections hold water that partially separated from the mud. A channel on the southern end of the containment structure funnels volcanic mud into the Kali Porong. (Indonesia’ president authorized pumping the volcanic mud into this river to carry the mud to the sea.) The tiny white puff near the center of the containment network results from volcanic steam at the mud’s primary eruption center. This patch of vapor testifies to the volcano’s continued activity. Although it was contained at the time this image was acquired, the mud still had the potential to breach its new containment structure.

From the time the eruption occurred, geologists debated the cause of the eruption. Some geologists pointed to a minor earthquake in the region. In June 2008, however, a report released by British, American, Indonesian, and Australian scientists concluded that the volcano was not a natural disaster, but the result of oil and gas drilling. At the time the report was released, the volcano was producing roughly 100,000 cubic meters (3.5 million cubic feet) of mud per day— enough to fill 53 Olympic swimming pools.