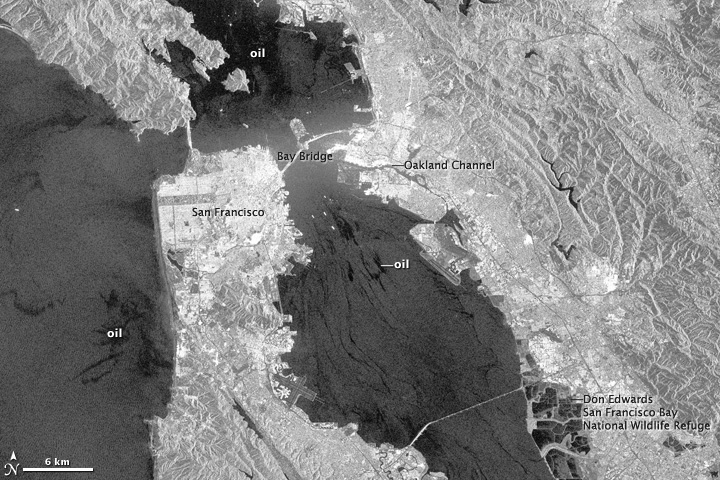 On November 7, 2007, a freighter leaving a port in the Oakland Channel struck one of the piers supporting the San Francisco-Oakland Bay Bridge. The damaged ship leaked nearly 53,000 gallons of oil into San Francisco Bay. The oil first spread southward, but the bay is influenced by tides, and when the tides changed, the oil spread north and west, blackening beaches throughout the bay. Oil passed beneath the Golden Gate Bridge and out into the Pacific Ocean, polluting shorelines from Point Reyes National Seashore in the north to Pacifica Beach in the south.

This image from Canada’s Radarsat satellite shows the spread of the oil on November 12, five days after the spill. Oil spills on open water can be very difficult to see in photo-like satellite imagery because the oil can form into thin ribbons or numerous small blobs that imperceptibly darken the water’s already dark surface. In radar imagery, however, the oil becomes more obvious. South of the Bay Bridge, the oil is stretched into long ribbons, while north of the bridge, the oil is spread more uniformly over the surface, encircling Angel Island. By the time this image was acquired, the oil had spread out to the Pacific and was visible in places along more than 30 kilometers of shoreline. Several boats or ships (bright white specks) are visible south of the Bay Bridge, and they may be part of the clean up effort.

Although San Francisco Bay is densely developed and has a busy shipping industry, the area is still rich in marine wildlife and birds. Volunteers helped to capture, clean, and release hundreds of affected birds and other wildlife in the weeks following the spill, but thousands more died from exposure to the oil. The negative impact on the bay's wildlife may linger for years. 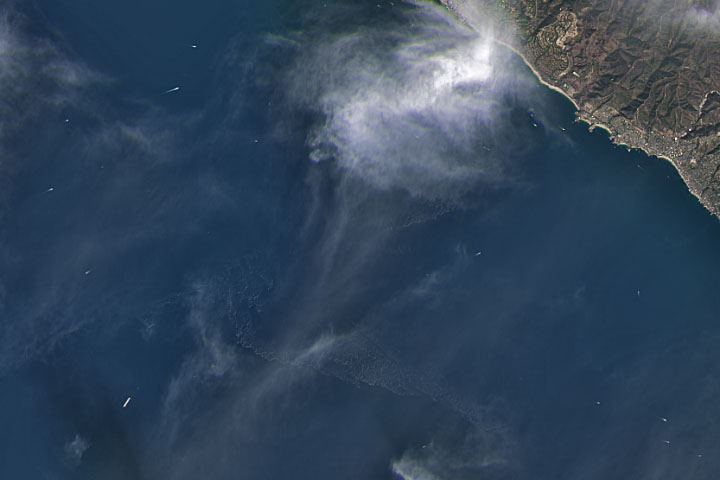