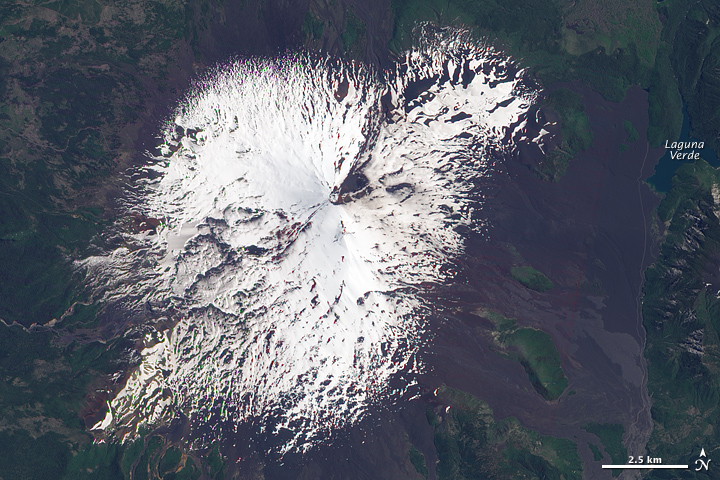 A layer of snow rested on a relatively calm Llaima Volcano on December 11, 2009, as the Advanced Land Imager (ALI) on NASA’s Earth Observing-1 satellite passed overhead. In this springtime image, snow caps Llaima’s summit, but the snow-free slopes appear in shades of purple-brown and green, likely a combination of volcanic rock and vegetation. Several months earlier, volcanic ash coated most of Llaima, thanks to an eruption following months of unrest.

After the ash emission that coated Llaima in April, the volcano experienced intermittent activity through June 2009. Observations of the volcano recorded occasional ash and steam plumes, incandescence, and small lava outcrops. Activity resumed in December, including more plumes of ash and steam, sulfur dioxide emissions, and low-level earthquake activity. No obvious activity was occurring, however, when ALI acquired this image.

Llaima ranks among Chile’s most massive and most active volcanoes. Reaching a height of 3,125 meters (10,250 feet), it has a volume of about 400 cubic kilometers, and sports two craters that have been active during historical times. Since the seventeenth century, observers have recorded frequent eruptions from Llaima, mostly explosive eruptions with some lava flows.

Acquired December 11, 2009, this true-color image shows a layer of snow resting on the summit of Llaima Volcano. The slopes appear in a combination of purple-brown and green, probably a combination of volcanic rock and vegetation. 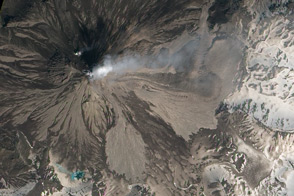 Activity at Mount Redoubt caused rapid changes on the nearby landscape in early April 2009.