Ice and Clouds in the Bering Strait 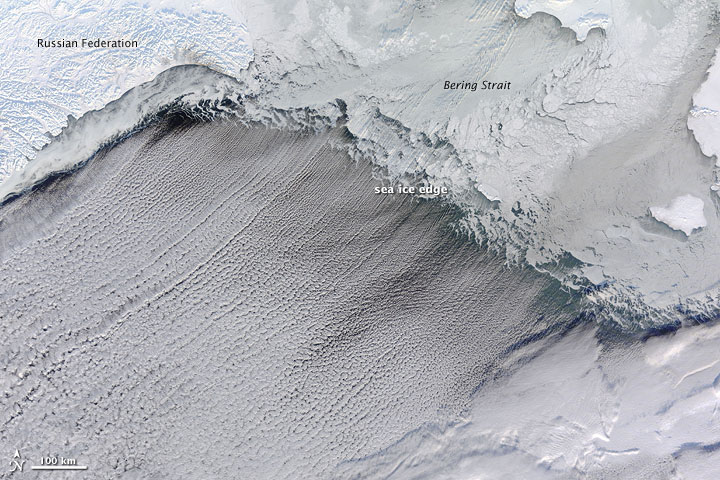 Winds from the north pushed sea ice southward and formed cloud streets—parallel rows of clouds—over the Bering Strait in mid-January 2010. The Moderate Resolution Imaging Spectroradiometer (MODIS) on NASA’s Terra satellite captured this photo-like image on January 16, 2010. The easternmost reaches of the Russian Federation, blanketed in snow and ice, appear in the upper left corner of this image. East of that, sea ice spans the Bering Strait. Along the southern edge of the sea ice, wavy tendrils—newly formed, thin sea ice—predominate.

The cloud streets run in the direction of the northerly wind that helps form them. When wind emerging from over a cold surface (sea ice) blows over the warmer, moister atmosphere over the open ocean, cylinders of spinning air may develop. Clouds form along the upward cycle in the cylinders, where air is rising, and skies remain clear along the downward cycle, where air is falling. The cloud streets run toward the southwest.

Both narrow and shallow, the Bering Strait allows a small amount of water to flow from the Pacific Ocean into the Arctic Ocean, and this warm water may play a pivotal role in ocean currents and sea ice formation. Warm waters passing through the strait into the Arctic Ocean might have helped reduce sea ice extent since the turn of the twenty-first century. Likewise, a study published in January 2010 concluded that, over the past 100,000 years, rising and falling ocean levels alternately opened and closed the Bering Strait. The strait’s status in turn affected ocean currents, which affected the rate of ice sheet melting during the last glacial period.

MODIS image of the Bering Sea, Bering Strait and southern Arctic Ocean acquired 7 May 2000. Image generated from MODIS band 2 (0.85 µm) at 250 m spatial resolution. Detailed structure and leads in the ice pack are apparent. Ice flow from the Bering Strait southward to the Bering Sea is seen in great detail.