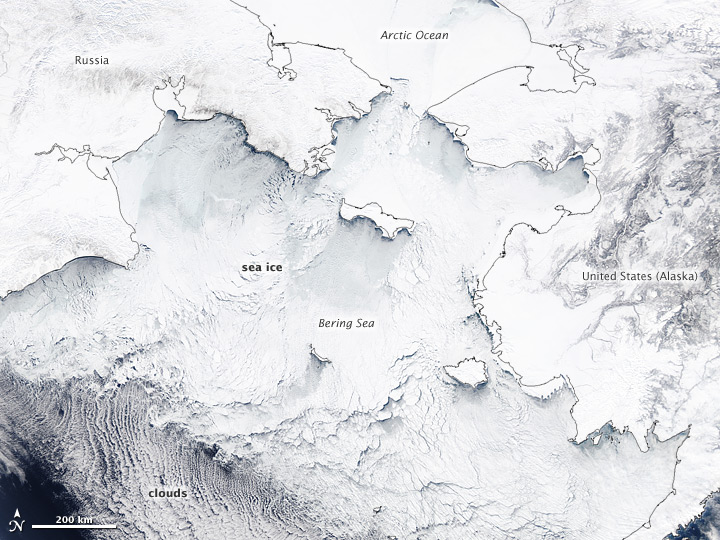 For most of the winter of 2011–2012, the Bering Sea has been choking with sea ice. Though ice obviously forms there every year, the cover has been unusually extensive this season. In fact, the past several months have included the second highest ice extent in the satellite record for the Bering Sea region, according to the National Snow and Ice Data Center (NSIDC).

The natural-color image above shows the Bering Sea and the coasts of Alaska and northeastern Siberia on March 19, 2012. The image was acquired by the Moderate Resolution Imaging Spectroradiometer (MODIS) on NASA’s Aqua satellite. Black lines mark the coastlines, many of which have ice shelves or frozen bays extending beyond the land borders.

NSIDC data indicate that ice extent in the Bering Sea for most of this winter has been between 20 to 30 percent above the 1979 to 2000 average. February 2012 had the highest ice extent for the area since satellite records started. As of March 16, National Weather Service forecasters noted that all of the ice cover in the Bering Sea was first year ice, much of it new and thin—which is typical in the Bering Sea

The accumulation of ice this season has largely been fueled by persistent northerly winds blowing from the Arctic Ocean across the Bering Strait. The local winter weather has been dominated by low-pressure systems—with their counterclockwise circulation—that have brought extensive moisture up from the south to coastal and interior Alaska, while sending cold winds down across the sea to the west.

Those winds pushed Arctic sea ice toward the narrow, shallow strait, where it piled up and formed an ice arch that blocked the flow. As arches fail because of wind stress, large floes of sea ice can move south into the Bering Sea. Ice also has piled up on the north side of St. Lawrence Island, near the mouth of the strait.

South of the strait and the island, those same winds push cold air and cold surface waters to lower latitudes, allowing the ice to grow farther south than usual. The widespread and persistent ice cover in the Bering Sea has posed significant problems for fisherman and for supply ships in the region. The weather driving the ice also brought extreme snowfall events to many parts of Alaska this winter.

The Bering Sea stands in stark contrast to the rest of the Arctic ice cap, where sea ice extent was below average in both January and February. Ice cover was down drastically on the Atlantic Ocean side of the Arctic, including the Kara, Barents, and Laptev Seas, where air temperatures were 4 to 8 degrees Celsius (7 to 14 degrees Fahrenheit) above the norm. 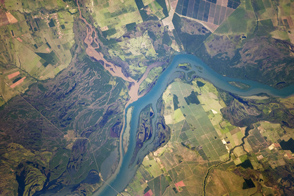