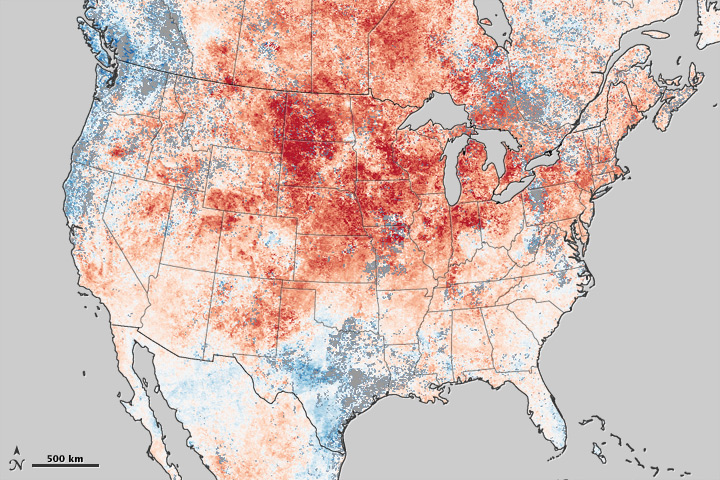 A huge, lingering ridge of high pressure over the eastern half of the United States brought summer-like temperatures to North America in March 2012. The warm weather shattered records across the central and eastern United States and much of Canada.

The intensity and scope of the heat wave is clearly visible in this map of land surface temperature anomalies. Based on data from the Moderate Resolution Imaging Spectroradiometer (MODIS) instrument on the Terra satellite, the map depicts temperatures compared to the average of the same eight day period of March from 2000-2011. Areas with warmer than average temperatures are shown in red; near-normal temperatures are white; and areas that were cooler than the 2000-2011 base period are blue.

Land surface temperatures are distinct from the air temperatures that meteorological stations typically measure. LSTs indicate how hot the surface of the Earth in a particular location would feel to the touch. From a satellite vantage point, the “surface” includes a number of materials that capture and retain heat, such as sand in the desert, the dark roof of a building, or the pavement of a road. As a result, daytime land surface temperatures are usually much higher than air temperatures—something that anyone who has walked barefoot across a parking lot on a summer afternoon knows from experience.

Records are not only being broken across the country, they're being broken in unusual ways. Chicago, for example, saw temperatures above 26.6°Celsius (80°Fahrenheit) every day between March 14-18, breaking records on all five days. For context, the National Weather Service noted that Chicago typically averages only one day in the eighties each in April. And only once in 140 years of weather observations has April produced as many 80°Fahrenheit days as this March. Meanwhile, Climate Central reported that in Rochester, Minnesota. the overnight low temperature on March 18 was 16.6°Celsius (62°Fahrenheit), a temperature so high it beat the record high of 15.5°Celsius (60°Fahrenheit) for the same date.