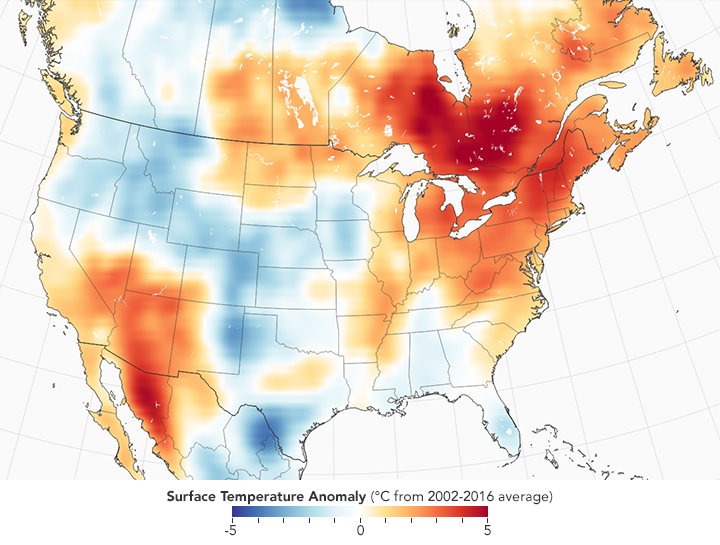 Though much of eastern North America just endured a wintry cold snap, it was not that long ago that the weather felt summery. In fact, it was just two weeks ago—well into autumn.

Weather records fell across the northeastern United States and Canada’s Quebec and Maritime provinces in October 2017. According to the U.S. National Centers for Environmental Information (NCEI), the month was the warmest on record (since 1895) for all six New England states. Maine, New Hampshire, Massachusetts, Vermont, Rhode Island, and Connecticut all witnessed monthly average temperatures that were 4.2 to 4.4 degrees Celsius (7.5 to 7.9 degrees Fahrenheit) above the 20th century average.

Temperatures also were much warmer than average in the Mid-Atlantic and Great Lakes regions, as well as the far Southwest. At least 20 cities—including Burlington, Albany, Portland, and New York City—set new October records. In contrast, six cities in the Rocky Mountains reported October temperatures that were among their top-10 coldest.

Environment Canada reported that dozens of cities across eastern Canada had their warmest September and October on record, including Ottawa, Montreal, Quebec, Fredericton, and Halifax. The long-term average temperature in Montreal across both months is typically 12.0°C (53.6°F), but this year the city saw a record-breaking average of 15.9°C (60.6°F). Similarly, Ottawa measured a two-month average of 14.5°C (58.1°F), compared to the long-term average of 11.5°C, (52.7°F). Toronto fell just short of its warmest September and October on record.

The nationally averaged U.S. temperature for October 2017 was 13.2°C (55.7°F), which is 0.9°C (1.6°F) above the 20th century average. The warm October temperatures in Canada and the U.S. Northeast were attributed to a strong ridge of high pressure that caused a large northward bulge in the jet stream.

According to NCEI, the span of January through October has been the third warmest and second wettest on record for the lower 48 United States.

The data come from the Atmospheric Infrared Sounder (AIRS) on NASA’s Aqua satellite. AIRS is a hyperspectral infrared sensor that observes atmospheric and surface conditions at 2,378 separate wavelengths. This makes it possible for scientists to create three-dimensional temperature profiles that go from the surface to 40 kilometers (25 miles) in altitude.