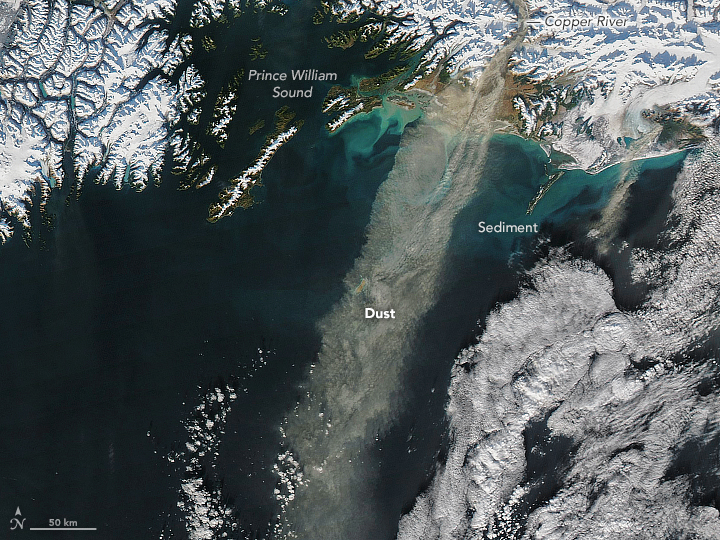 Scientists first reported major dust storms in southern Alaska in 1911, but only during the past decade have they begun to find that high-latitude dust storms play a role in fueling phytoplankton blooms. In 2011, Santiago Gassó of NASA’s Goddard Space Flight Center, John Crusius of the U.S. Geological Survey, and other scientists published the first study to describe how dust storms play a role in supplying nutrients, particularly iron, to the Gulf of Alaska. Since then, each successive dust storm has offered these scientists new opportunities to tease out details of the complicated relationship between dust and Gulf of Alaska phytoplankton.

On November 11, 2017, the Moderate Resolution Imaging Spectroradiometer (MODIS) on NASA’s Aqua satellite captured this image of the coast along the Gulf of Alaska. Thick plumes of dust—mainly fine-grained loess formed when glacial ice pulverizes rock—blew south from river valleys. Dust storms in southern Alaska generally occur in late fall, when river levels are relatively low, snow has not yet fallen, and layers of loess-rich mud are exposed to the wind.

Since light is also crucial to phytoplankton growth, Gassó and his colleagues propose that the influence of dust falling in the ocean may be delayed until the following spring. To get a better understanding of the relationship, the scientists are trying to determine how much iron is supplied by dust storms, as compared to the upwelling of nutrient-rich water from the depths or the mixing of iron-rich sediments (runoff from rivers) by surface eddies and gyres. However, the latter phenomena tend to be coastal, whereas wind-blown dust can cross hundreds of miles of open ocean to areas where iron is normally depleted.

“It is convenient that we have a phenomenon happening right in our backyard that lends itself to studying the factors that controls marine phytoplankton growth,” said Gassó, noting that much of the research on this topic has been done in the Southern Ocean around Antarctica.

Studying modern dust storms can also make scientists better at interpreting ice cores, which record past environmental conditions and changes in climate. Many ice samples show evidence of both increased dust deposition and decreased concentrations of carbon dioxide in the air during glacial periods (ice ages). It is not yet clear why increased dust and low levels of atmospheric carbon dioxide would go hand-in-hand, but some scientists think that dust-triggered phytoplankton blooms, which can absorb large amounts of carbon dioxide, may have played a key role.

In November 2017, satellites captured imagery of dust and silt being carried over the Gulf of Alaska.